Only 15 days more before I leave for New Zealand to visit my family. I finally had a day off work where I could get up to Oak Harbor to get a couple more gifts to take with me. My Grandsons love tee shirts with funky graphics on them, so I looked around and found some I am sure they are going to like. 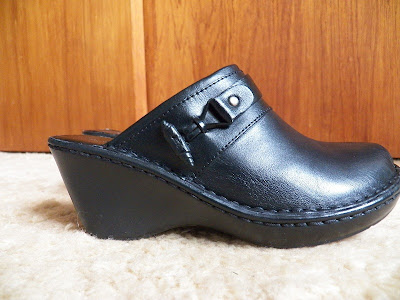 I wasn't intending on buying myself anything, but when one comes across a good buy, well who can resist? I saw these cute shoes on clearance for $4:99 and a girl can't have too many pairs of shoes, right? Being just shy of 5' tall I need all the help I can get, so I thought the 2 1/2" heels on these should boost my height a little. *grin*
Sometime in the near future, I need to go through the closet and take all my smaller shoes to the thrift, as I am now wearing a 1/2 size larger than I used to. Jeez, when will it end? I am also a size larger in my clothing. Dang, I know they said getting old is not for sissies, and I have found that to be true.

Posted by Jennifer AKA keewee at 3:06 PM 2 comments:

There is no doubt fall is here 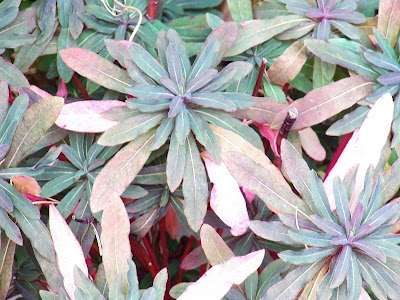 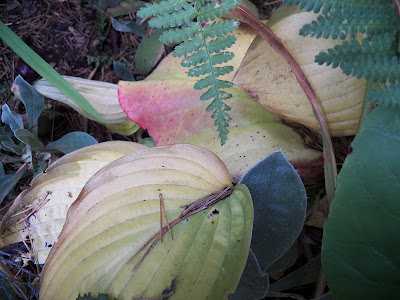 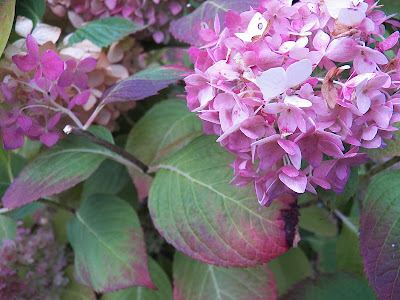 Thursday morning we left in our RV for the long drive to Nampa Idaho, to compete in The Idaho Steel Challenge match. The drive as far as Huntington, where we spent the night, was just the way we like it, that is uneventful.
Even though Friday morning dawned cool, it soon warmed up, and by the time we arrived at the range we were, clothes clinging hot. Dang! I said, if it is this hot now, then it is going to be a miserable, hot day for the match tomorrow. 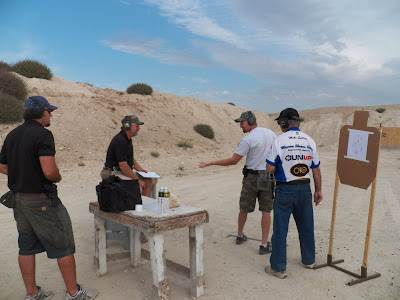 Gimme, gimme,
My caption for the photo in which I did not know what the guys were about.
Saturday, it was a very pleasant surprise to wake up to a cloud covered sky, and we were hoping it would stay that way all day. 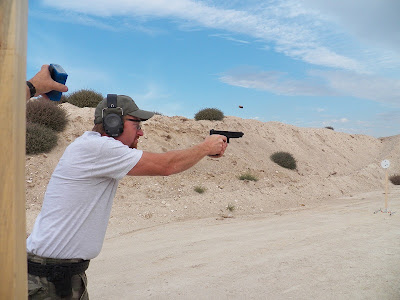 Are you having fun yet?
Yes indeed, I am. 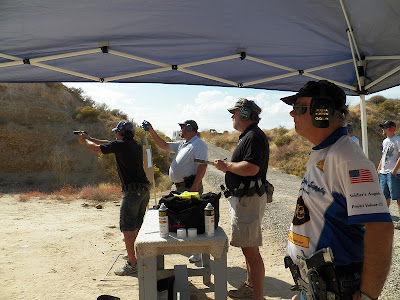 Remember what I said about 'it would be nice to have cloud cover all day' Well I couldn't have been more wrong, because just as we were starting in on the fourth stage, the blistering sun came out from behind the clouds, and we instantly felt as though we were being slow baked in an oven. I do not do well in the heat, and I struggled to shoot the last three stages. Whine, whine whine! 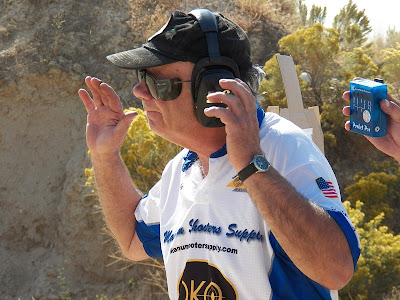 "Are you ready?" asks the Range Officer
"yes" answers Mr C
"stand by" says the RO
Beeeep goes the buzzer of the timer.
Mr C draws his firearm, and commences shooting. 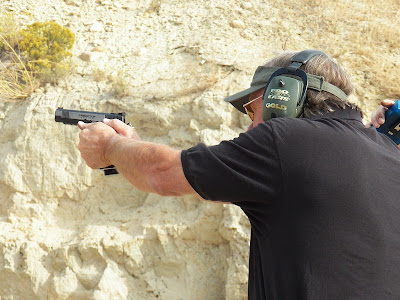 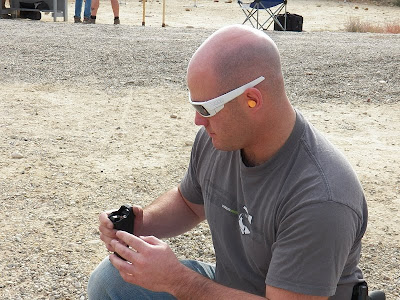 I like to sneak up on folk and take their picture. 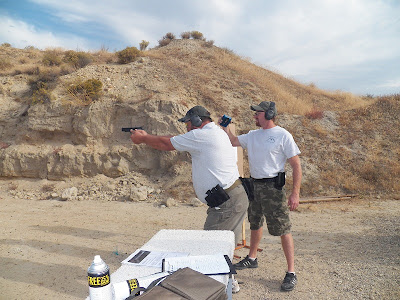 Rich showing us how it was done, and he sure was having a grand time.
And how did we do?
A picture, or in this case, two pictures are worth a thousand words 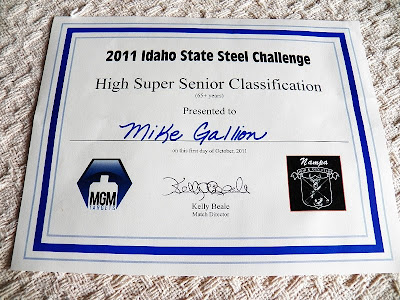 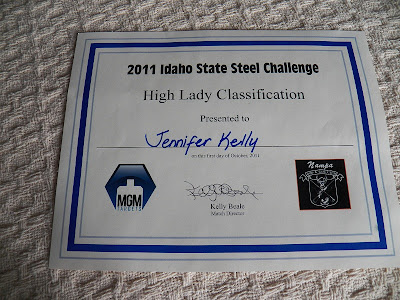 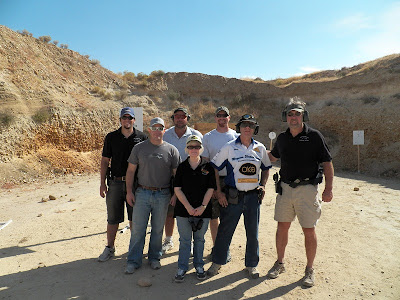 Our squad of seven did rather well.

Posted by Jennifer AKA keewee at 2:57 AM 2 comments:

There is a certain charm about small rural towns.Recently, during our drive to Idaho we were getting very low on gas, so decided to leave the freeway to find gas in a small town called Huntington. The gas station owner told us he had sold out of gas due to the many hunters who had stopped at his establishment to fill up their gas tanks, but the tanker would be there around 8am in the morning to top up the tanks.
By this time it was about 6:30pm and we had been on the road since 9am so we were ready to rest for the night. The gas station owner said there was a small park just up the road and we could pull around back of it and spend the night there, which we did.
It was a little early to sleep, so we strolled the main street, all of about a hundred yards long, looked through a fence at some old farm machinery, strolled up the street past a cafe, a bar and another restaurant, stopped to pet an old black Labrador who came wagging up to us, looking like he was the official town greeter, then returned to the park to sit on a bench and watch the world go by. I love the way small town people say "howdy" as you pass them in the street, the way they wave at you as they drive by, it all makes you feel welcome in their small town, 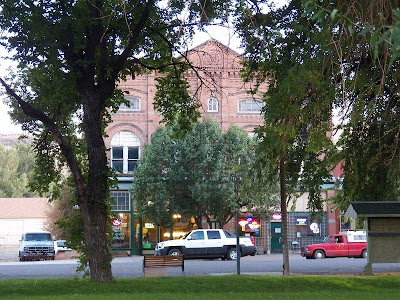 We sat on the bench you can see in the photo, which is right across the road from a very old brick hotel. I mentioned to Mr C that one good quake and the whole building would just be a pile of bricks and rubble spilling into the street. The cafe, bar and restaurant, previously mentioned, are on the street level of the hotel, and it looked to me that the rooms on the two top floors were vacant, as the windows were very dirty, lacked any window coverings, and there was just an air of emptiness about the rooms.
As we sat enjoying the balmy evening air, we discussed where we would eat breakfast in the morning, would it be the cafe, or perhaps the restaurant had better food, we would see in the morning where the locals eat breakfast. Our decision was made for us, as the cafe was the only one open, and what a wonderful home cooked kind of breakfast we enjoyed while soaking up the atmosphere in the small town cafe.
They served coffee in real coffee mugs, mine had flowers on it, Mr C's a picture of a revolver, with "make my day" printed underneath. There was a small paperback book on our table telling the 'true' story of a pioneer's life, there were pictures on the walls from the 1800's depicting life in the area, and the locals who came and went, greeting each other as only those who really know each other do. Ah! small town friendliness. 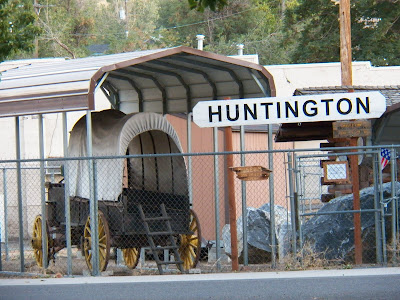 The fenced lot housing some wonderful old farm machinery, a wagon, and a log building which had been a depot of some kind. There was a note attached to the fence saying, one could get the key from the cafe, to unlock the gate so you could wander around. 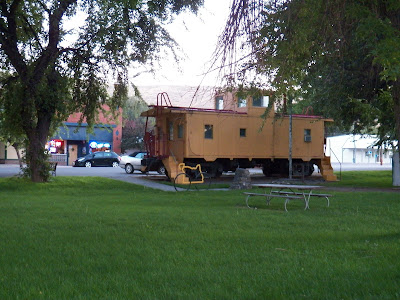 Looking through the hedge from where our RV was parked, towards the main street.

I would have liked to see inside the old caboose, but it was locked up for the night. Speaking of cabooses, or rather trains, just about 50 feet from our overnight parking place, ran a main trunk railway line, and all though the night we heard diesel engines pulling their loads by. I must admit, after the first few trains had rumbled by keeping me awake, I finally fell asleep, and would hear in my sleep a train coming, kinda' come out of my unconscious state, told myself it is only a train, and fell asleep again. Odd, but it was almost a soothing sound, perhaps because it was a familiar sound from my childhood.

We enjoyed our overnight stay in this charming little town which makes strangers feel welcome.
Posted by Jennifer AKA keewee at 5:14 PM 2 comments: