This was our fourth year at Piru CA where Mr C shot in the World Steel Challenge. The range is located about 15 minutes Northwest of Magic Mountain, half-way between Lake Piru and the town of Piru. As usual it was hot, dry, and dusty, a far cry from what we are used to here on Whidbey Island so we both were feeling quite wilted from the heat, but we made it through. Thank goodness for air conditioned vehicles and hotel rooms.
Every year at the event I have said "next year I will shoot this match" But when the time came around I chickened out. Next year I do intend on shooting and will certainly have to put in some practice time before doing so.
We enjoyed re-connecting with friends from past years, making new friends, and watching the best in the world compete.
The pictures in the slide show of our squad members, 'on the move' are taken as they shoot 'Outer limits' not one of the most liked stages by many competitors.

THIS TIME WE ARE GOING FOR SURE

Last week at this time, we were ready to leave for California, but there was a major glitch in our plans, but to day we are ready. I did make use of my down time last week, and managed to get some yard work done and a few chores around the house which need attending to.
I checked the weather for Piru, where we will be spending two days outdoors at the range, and it will be in the high 90's, better than 118 + degrees it has been in past years. Mr C is competing in the World Steel Challenge match.
Posted by Jennifer AKA keewee at 8:10 AM 2 comments:

A NICE WEEKEND WITH A RANT THROWN IN

First comes the nice part. Early Saturday morning we drove the freeway and took the first of two ferry rides to get to the range in Silverdale where we had a good, but warm day shooting a fun steel match. After the match we enjoyed dinner with friends at one of our favorite restaurants in the area, then around 5pm we went to another friend's home where a block party was in progress. 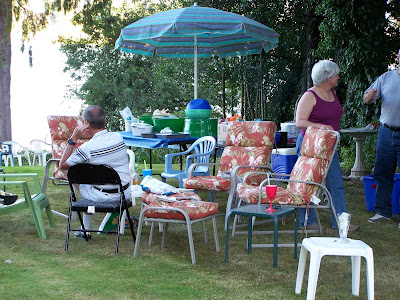 Here, under the shade of a very large tree, was more food and beverages set out to enjoy. I especially liked the wonderful very cold margaritas, which certainly hit the spot on this very hot day. I drank one or two, or was that three, who was counting ? and felt quite relaxed *grin* Thank goodness we had taken our RV and parked it in the yard, so we did not have to make the long drive home. 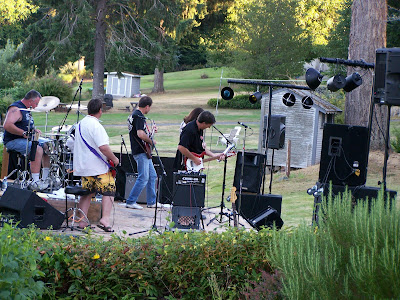 The neighbors had built the stage specially for the band, which played for our entertainment until about 9:45pm. 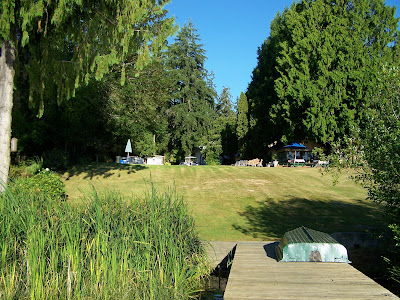 This morning, Sunday, I was up early and strolled down to the dock, where I sat on a bench to enjoy the tranquility of the morning, before the first boats pulling water skiers made noise. The photo is taken looking back up to wards the house. 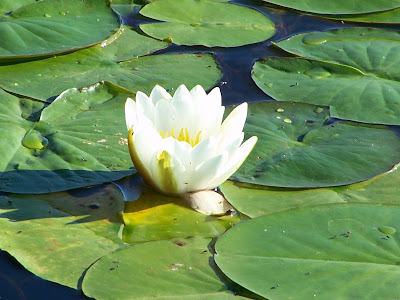 The water lilies growing near the dock were starting to come out. They sure are pretty. 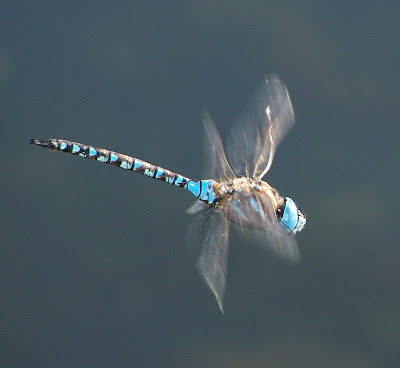 There were many dragonflies flitting here and there, and one happened to stop and hover right in front of me, almost as though posing for the camera.
RANT TIME
When we left Silverdale this morning, we decided to drive to Port Townsend and try to get on the ferry there, instead of driving to catch the Kingston ferry then more driving on the busy freeway to catch the Mukilteo Ferry back to the island. We knew that most people make reservations for the crossing, but we also knew that they do leave a little room for standby travelers, so we crossed our fingers and hoped to get on one of the crossings at Port Townsend.
As we approached the ferry dock at Port Townsend, traveling in the lane designated for ferry traffic only, we saw one of the ferry personnel sitting on a bicycle by the curb, in the little bit of shade offered by a planter full of flowers hanging from a lamp post. He sure had a surly look on his face as he motioned us forward so he could speak to us, telling us in a snappish voice, that we may be on the 3:45 ferry or the 5: 45 one, and to pull forward behind the vehicle in front of us. As we moved forward, Mr C and I looked at each other and commented on his demeanor.
Anyhow, we sat there in the heat and waited, then as the ferry finally approached the dock, the gentleman in the vehicle directly in front of us, stepped out of his vehicle obviously with the intention of speaking to the SFW who was approaching on his bicycle. As the SFW came abreast of the open window on my side of the RV the gentleman waiting spoke to the SFW who completely ignored him and went on down the road and onto the dock. Mr C and I were outraged at SFW's rudeness and called to the gentleman who had tried to speak to SFW. All the gentleman wanted to ask, was how likely was the possibility of making the next ferry. We said to him that earlier on, we had not been impressed with the SFW's behavior, so the gentleman, not knowing which, or if he would be on a ferry anytime soon, decided to pull out of the ferry line, drive back the way he had already come, to return home by a longer route.
By this time the ferry had docked so we were able to pull forward, pay our fare and pull onto the dock to wait in the standby lane. Gee! guess who, with a surly face, was there impatiently motioning us forward to park as close as possible to the vehicle in front. This time I knew Mr C had had enough of the jerk as he climbed out of our RV to confront the SFW. Mr C asked the SFW his name, and the SFW put out his hand expecting a handshake. I chuckled to myself when Mr C did not offer his hand in return, instead explaining very firmly how displeased we were at the treatment the gentleman in front of us received from SFW Of course, SFW tried to make good with an apology, but he was apologising to the wrong people. I did not hear the rest of the ahem! conversation between my honey and SFW but I know Mr C certainly got his point across.
Then as we waited for the next ferry, we wondered if we had really ticked the SFW off and he would retaliate by not boarding us on the ferry There is a sign on the dock which states something like,vehicles may not be loaded in order etc. etc. Anyhow, all worked out as we did manage to get on the next ferry and make it back to our home, and we do have the name of SFW, so we just may make a phone call to the Washington State Ferry authorities, to lodge a complaint on this SFW who needs to work on his people skills. Dang it anyway, we, the taxpayers, are paying his exorbitant wages, so a little respect and customer service, is certainly not much to ask for.
Posted by Jennifer AKA keewee at 6:23 PM 5 comments:

WHEN YOU ARE HANDED LEMONS,

YOU MAKE LEMONADE!!!!!!
Yesterday I dragged suitcases upstairs, sorted clothing and toiletries ready to go into the suitcases, and knew I had everything ready for our trip to California today.
This morning early I had to make a quick run into the grocery store, and when i came back Mr C walked toward me down the hallway and said "I have bad news" my heart dropped, fearing I was going to hear something about family or friends, instead he said that we are supposed to be in California next week, not this week.
Well to make it a short version of the story, Mr C got on the phone, and good fortune smiled on us, and we have seats on the plane for next week, (better seats then before) changed the shuttle taking us to Sea tac to next week, changed the rental car reservation, and called the hotel to check on the days they have us booked. We are really puzzled why the hotel did not question the dates we had booked (11th through 15th) as they offered a group rate to all the folks involved in the Steel Challenge match being held for the week of 18th through 22nd. Duh!
Anyhow the lemons are being made into lemonade, and I will spend time in my garden catching up on chores. 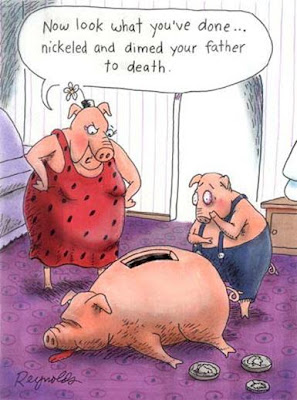 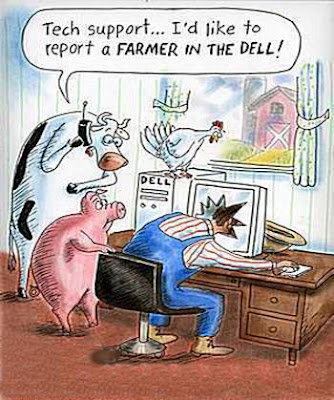 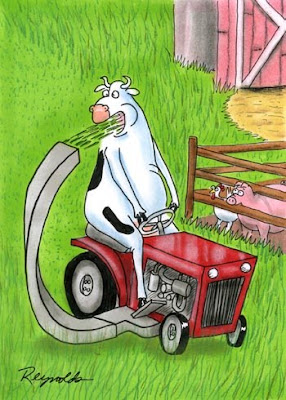