Headlines from the year 2029


Iraq still closed off; physicists estimate it will take at least 10 more years before radioactivity decreases to safe levels.


France pleads for global help after being taken over by Jamaica.


Castro finally dies at age 112; Cuban cigars can now be imported legally, but President Chelsea Clinton has banned all smoking.


Postal Service raises price of first class stamp to $17.89 and reduces mail delivery to Wednesdays only.

Japanese scientists have created a camera with such a fast shutter speed, they now can photograph a woman with her mouth shut. (hey! I just sent it. I didn't write it!)


New federal law requires that all nail clippers, screwdrivers, fly swatters, and rolled-up newspapers must be registered by January 2036.

Capitol Hill intern indicted for refusing to have sex with congressman.

Thanks to Bob & Lorna for this.
Posted by Jennifer AKA keewee at 5:11 PM No comments:

Carnival of recipes is now up.

For all of you who like to try new recipes here is a link to check out.

http://feistyrepartee.mu.nu/archives/107315.php
Posted by Jennifer AKA keewee at 1:23 PM No comments:

This time I have two kiwi expressions for you.

Box of budgies: Cheerful, happy, very good. ( a budgie is a parakeet)

Bob's your Uncle: roughly translates to 'there ya go - that's all there is to it'
Just press this big red button that says 'Launch Missile' and "Bob's your Uncle"
Posted by Jennifer AKA keewee at 10:48 AM No comments:

Bake cake as package directs. Cool and cut into cubes.
Prepare pudding as package directs.
Arrange one half cake cubes in glass bowl, sprinkle half of rum or brandy over cake.
Layer one half of pudding, then one half cherry filling , next one half cool whip.
Repeat layering in order given. Chill at least 3 hours.
This looks great in a tall stemmed bowl.
Posted by Jennifer AKA keewee at 10:06 PM No comments: 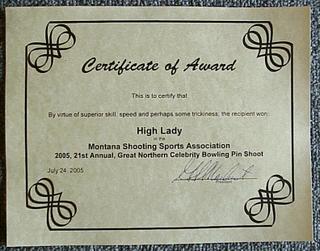 How cool is this!

Wow! What a weekend. We left for Missoula right after the shoot at Coupville. It was around 4:50pm when we left Oak Harbor after buying a few things at Wal mart, some munchies,and the real important stuff like, batteries for the red dot scope and ammo. We then drove until 1:30 am, to a rest stop just this side of Missoula Montana, where we grabbed a few hours sleep before heading to the range.

I still cannot believe how well I shot. My personal best table up to then was 5.46 seconds for shooting five bowling pins off a table. I was able to best this record with a 4.02 second table.

With all the great shooting I was doing, I thought I would be somewhere near the winners circle, not in it, but near, as the other shooters were so fast and more experienced than I am.

After the shoot was done, came the award ceremony. There was an award for this event, an award for that event, all going to the guys. Mr. Completely was first in the 22 pistol event.

THEN, I heard Gary say, "the award for "High Lady " goes to Jennifer". I was so delighted , I just knew I had shot well with my total time being 8.53 seconds for ten bowling pins .

There is a more extensive report about our day on Mr. Completely's blog, so click here to go look.
Posted by Jennifer AKA keewee at 9:23 AM 3 comments:

Hi folks, I will be away for a couple of days, Mr completely and I are heading up to Coupville for a pin shoot, then right after we finish shooting there, we head to Missoula Montana for another shoot.

I plan on taking my camera, so come Monday evening sometime I should have a story and pictures about our weekend shooting excursion.
Posted by Jennifer AKA keewee at 8:15 AM No comments:

Chocolate fish: a chocolate covered marshmallow fish. Also frequently given (literally or figuratively) as a reward for a job well done; as in "Good on ya mate, you deserve a chocolate fish".
Posted by Jennifer AKA keewee at 7:50 AM No comments:

I large bowl place, cabbage, carrots, onions, in layers, sprinkling the 3/4 cup of sugar between the layers.
let stand, while making dressing.
Mix the vinegar, mustard, 1/4 cup sugar, salt, and celery seed in saucepan and bring to a boil.
Add the salad oil, bring to a boil again, then immediatly pour over the cabbage mix.
Stir well to mix, let it cool before placing in an airtight container and refrigerating.
This coleslaw will keep for at least three weeks in the refrigerator.

A great salad to have ready to go with your barbecued meats, or take to a potluck.

Posted by Jennifer AKA keewee at 7:59 AM No comments: 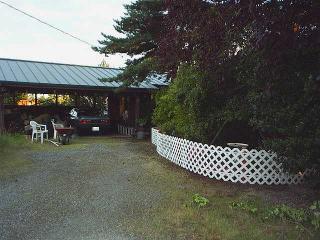 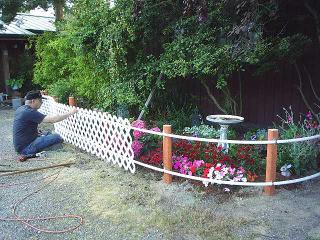 Our new fence is all finished, and looks great. Mike did a wonderful job of constructing this fence out of PVC lattice and pipe, with wooden posts.

The post holes took some digging as there is several inches of gravel alongside the garden, and the post hole digger Mike used was very poorly designed.

The first few days after the fence was finished, I would see the rabbits sitting outside the fence looking through the lattice. I can just imagine what they were thinking.

The cute little rabbits ( I can call them cute now they are out of my garden) are now back to eating grass in the pasture, and the plums which are ripe and falling off one of the early bearing plum trees.

Thank you Mike, for saving my sanity, and probably some rabbits from the stew pot!
Posted by Jennifer AKA keewee at 7:24 PM 1 comment:

I am really biased on this one as it is a movie filmed in New Zealand.

The Whale Rider movie is the story of Pai, a twelve year old maori girl, and her struggle against maori traditions . The movie portrays Pai's inner knowledge of her calling and her determination to follow her dream.

The movie will tug at your heart strings, you may find yourself laughing, then next moment wiping away a tear. The scenery is spectacular, the acting is extremely well done, and you will see a wonderful example of maori traditions.

Keisha Castle-Hughes who plays Pai, was nominated for an academy award, quite an achievement for a twelve old.

You can see it on PBS at 9pm in the Seattle area on Sunday July 24th, or check out your local listings.

Posted by Jennifer AKA keewee at 2:38 PM No comments: 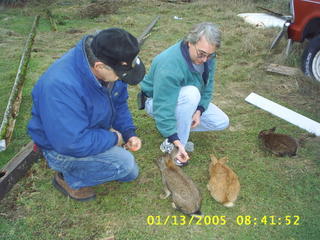 All my complaining about the "bloody" rabbits eating all my flowers is , as I said "all our fault".

Last summer when the plums were ripe and falling off the tree, we noticed how much the rabbits liked to eat the fallen plums.

We started to throw plums to the rabbits and as they grew bolder and came closer we wondered if they would eat out of our hands.

As you can see by the picture, Mike, and our friend Greg , are feeding Momma bunny, notched ear bunny and brown bunny. YEP ! we named them.

They were so tame they would come right up to the house, in fact it seemed when they heard the door open there they were waiting for dessert.

Well, after a while the plums were finished, what now? I know, we have an apple tree, rabbits like apples don't they?

It did not take long before all the apples were finished. hmmmm let's see, Bugs bunny likes carrots , maybe ours do too.

Yes, they did like carrots, but at the same time they discovered the flowers in my new flower bed in front of the house.

This is why we have a nice new fence around my flower bed.

Posted by Jennifer AKA keewee at 8:37 PM No comments:

First of all I am using a New computer.

Yesterday my old one "croaked" so Mike spent hours trying to track down the problem, finally said "to Heck with this! " and proceeded to build me a new one.
How lucky can a girl be?

Today we are going up to the range for some practice as next Saturday we go to Coupville for a shoot, then right afterwards we jump in our RV and head to Missoula Montana for another shoot on Sunday.

Hopefully I will have pictures, all depends on my camera and the person holding it, namely me.

To see the gun I shoot, scroll down to my first post, which was a " practice" run.
For you who don't know, my gun is a Beretta U22Neos.
Posted by Jennifer AKA keewee at 9:30 AM 2 comments: 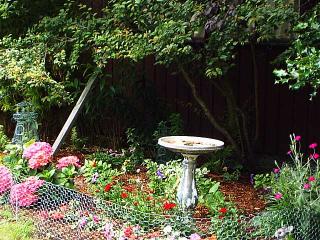 
Here is a picture of part of the front flower bed which looked a whole lot better before the bloody rabbits chewed on it. The chicken wire fence did not faze them one little bit, the larger rabbits jumped right over.

War was declared, and a new fence has since been erected, much to the dismay of the rabbits who are now back to eating what is growing out in the pasture.

I am so enjoying my garden, everything I have planted is doing so well.

There is a whole 10 acres to put into garden, just kidding, as much as I love gardening 10 acres is pushing it.

Posted by Jennifer AKA keewee at 8:22 PM No comments:

I have decided to post a Kiwi word or expression each week ( if I feel like it ! ) translated to American.

This week there are two words.

Kiwi: A small flightless bird native to New Zealand, or, the name New Zealanders go by.

I was heading to the kitchen for a snack when Mike asked me " where did you get the best hamburger you ever had? "
I had to think for a moment before telling him that I remember the hamburgers I ate when still living in New Zealand.
They tasted different than the ones we get here, probably because of all the different things we put on them.
Instead of pickles we had beetroot (pickled beets) OK, so that sounds "YUK" but believe me it tastes great.
Then Mike said I had better go look at his blog, he had just posted a story about hamburgers.
OH ! BOY ! was I surprised.
Go check it out here.
Posted by Jennifer AKA keewee at 8:56 PM No comments:

Brush piecrust with melted butter, cut cream cheese into small cubes and spread over piecrust.
spread the ham, chilies and grated cheddar cheese evenly over the cream cheese.
mix heavy cream into beaten eggs ( you may need a little salt if the ham or bacon is not salty enough) and pour into piecrust.
Bake 425 for 10 minutes
then 350 for 20 minutes or until done

This is one of my favorite pies, it is good warm or cold, and a "hit " at potlucks.
Posted by Jennifer AKA keewee at 5:41 PM 1 comment: 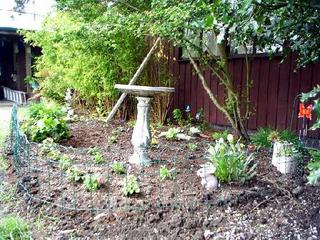 This is the front flower bed before the fence was built

Here is the start of the flower bed by the front door. I had removed old scruffy bushes, put in a bunch of compost, peat etc and did some planting. The green wire fence you can see, I thought would keep the rabbits out, WRONG, they jumped right over, Mike has since built me a nice lattice fence which keeps the little stinkers out. A picture of the new fence will be posted soon.
Posted by Jennifer AKA keewee at 10:16 PM No comments: 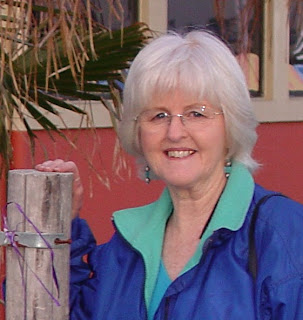 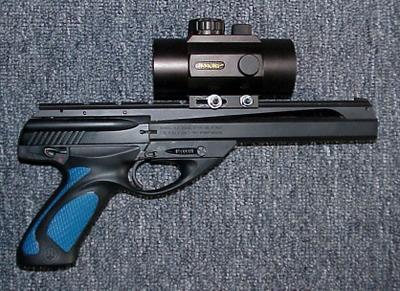