Since 5/11/08 I have been adding a photo to THIS 'N' THAT for a future post. For the last two days I have been outdoors getting grass mowed, more vegetables and Perenials and annuals planted in the gardens. 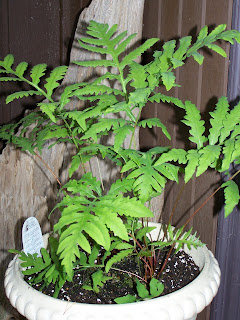 Ferns are some of my favorite plants for the shady areas of my garden as are Hostas. I am starting to get quite a collection of ferns, but unfortunately, some of the most unusual ferns are quite expensive. 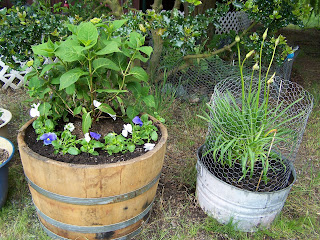 Hydrangea, Pansys and Agapanthus
Yesterday I planted the "endless summer" blue Hydrangea in the 1/2 barrel and today I planted white and blue pansys around the base.
I also planted the Agapanthus in the old wash tub and placed chicken wire around it to stop the rabbits from devouring the plants. A couple of weeks ago, I had planted a few marigolds in the tub and after the bunnies had found them, all that they left, are a few leaves. I am hoping the 1/2 barrel is high enough that the rabbits will not bother the pansys. I will not hold my breath on that one. 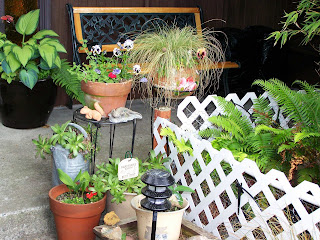 Some of the plants on the front porch. 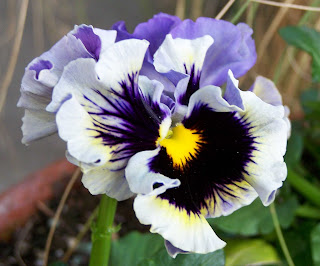 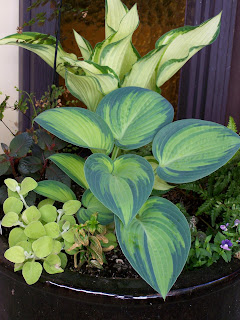 My favorite pot on May 11th. 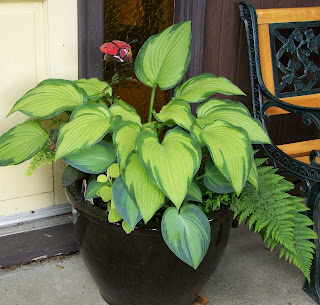 My favorite pot today, May 31st.

This is the third year the Hostas and Ferns have been in the pot and they are looking so lush and lovely.

All I have left to do now, is flush the irrigation system I installed last summer, set the timer for automatic watering for when it gets hot and we are away from home, then just sit back and watch everything grow. Of course I will still have to pull weeds as they come up, and feed the plants and vegetables for the best results. I must say, a few weeks ago I thought all the projects were never going to be finished, and I was already bone weary, but now all is done, I am well pleased with my efforts. I also thank my honey MrC for all his hard work, as I certainly could not have done all the work by myself especially building the fence around the vegetable garden and the raised beds. 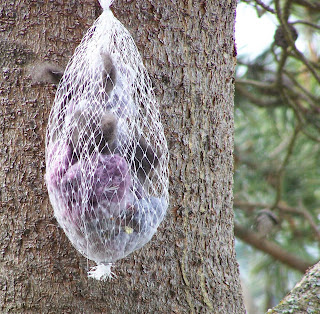 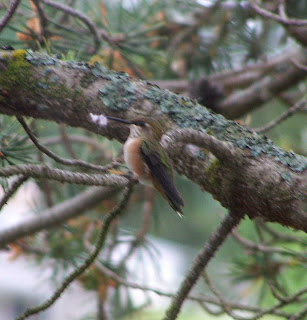 Posted by Jennifer AKA keewee at 7:43 AM 3 comments:

An 80-year-old man went to the doctor for a check-up and the doctor was amazed at what good shape the guy was in.

The doctor asked, “To what do you attribute your good health?”

The old timer said, “I’m a turkey hunter and that’s why I’m in such good shape. I’m up well before daylight and out chasing turkeys up and down the mountains.”

The doctor said, “Well, I’m sure that helps, but there’s got to be more to it. How old was your dad when he died?”

The old timer said, “Who said my dad’s dead?”

The doctor said, “You mean you’re 80 years old and your dad’s still alive? How old is he?”

The old timer said, “He’s 100 years old and, in fact, he hunted turkey with me this morning, and that’s why he’s still alive... he’s a turkey hunter.”

The doctor said, “Well, that’s great, but I’m sure there’s more to it. How about your dad’s dad? How old was he when he died?”

The old timer said, “Who said my grandpa’s dead?”

The doctor said, “You mean you’re 80 years old and your grandfather’s still living! How old is he?”

The doctor was getting frustrated at this point and said, “I guess he went turkey hunting with you this morning too?”

The old timer said, “No... Grandpa couldn’t go this morning because he got married.”

The Doctor said in amazement, “Got married! Why would a 118-year-old guy want to get married?”

The old timer said, “Who said he wanted to?”

With the help of my Honey MrC the vegetable garden we have been working on for the past few weeks is now completed. Today MrC used a sawsall to cut the rims out of three old tires we had lying around,then I placed them in the garden and filled them with rich topsoil and compost. Two other containers I am using as raised beds were also filled with the topsoil/compost mix. Then multiple layers of newspapers were spread between the beds then covered with a layer of pea gravel. Last of all I planted a few more vegetables in the new raised beds.
To see the finished project click HERE.
Now I need a nice hot shower to ease the stiffness in these old bones. MrC is already lying on the heating pad to ease all his aches and pains.

Posted by Jennifer AKA keewee at 6:23 PM No comments:

The wise old Mother Superior was dying. The nuns gathered around her bed. She asked for a little warm milk to sip so a nun went to the kitchen to warm some milk.

Remembering a bottle of whiskey received as a gift the previous Christmas, she opened it and poured a generous amount into the warm milk.

Mother drank a little, then a little more, then before they knew it, she had drunk the whole glass down to the last drop. “Mother, Mother” the nuns cried, “Give us some wisdom before you die!”

She raised herself up in bed with a pious look on her face, and pointing out the window she said, “Don’t sell that cow!”
Posted by Jennifer AKA keewee at 9:26 PM No comments:

I should say MrC's part is finished. Now it is up to me, to plant and tend the garden. So far I have several varieties of tomatoes, swiss chard, lettuce, spinach, garlic, carrots, parsnips, corn, sweet bell peppers, jalapeno peppers, peas, beans, several different herbs, four different varieties of strawberries, and many more things to get into the raised beds. 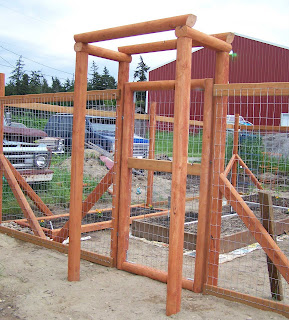 I am considering planting a clematis on each side of the arch. 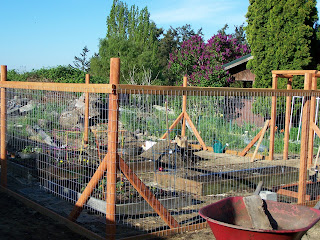 MY honey, MrC has done such a wonderful job of building raised beds and a fence surrounding my new vegetable garden. He also surprised me, for Mother's Day, with an arched entryway into the garden, upon which I plan on growing a clematis up each side. The only thing left to do is to build the gate and install it.
WHAT A GUY !!!!!! He does so much for me and I sure do appreciate it all, and love him dearly for it.
MrC says all the Broccoli from the garden will be will be worth all the hard work. This is a joke between us as he can't stand broccoli.

Posted by Jennifer AKA keewee at 7:48 PM 6 comments:

A young boy had just gotten his driving permit. He asked his father, who was a minister, if they could discuss his use of the family car. His father took him into his study and said, “I’ll make a deal with you. You bring your grades up, study the Bible a little, get your hair cut and then we’ll talk about it.”

After about a month, the boy came back and again asked his father if they could discuss his use of the car. They again went into the father’s study where the father said, “Son, I’ve been very proud of you. You have brought your grades up, you’ve studied the Bible diligently, but you didn’t get your hair cut.”

His Father said, “Yes, and everywhere they went, they walked.”

Posted by Jennifer AKA keewee at 8:03 AM No comments:

When ordering Tulips last year, to plant in Autumn, I could not decide which of the 11 double Tulips I wanted, so I ordered a bag of mixed. Now I see how beautiful these brightly colored double flowers which resemble peonies are, I will order some of the other colors for next season. 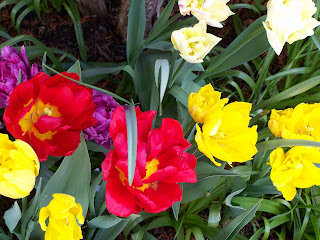 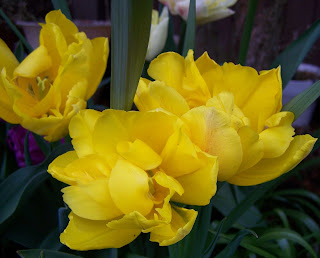 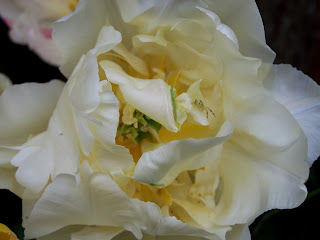 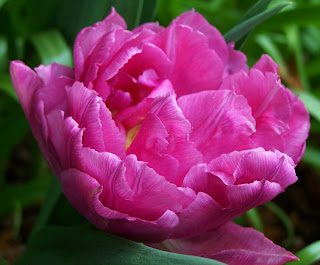 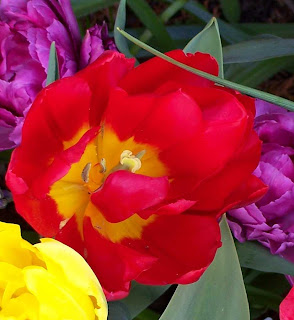 This one is either Abba or Miranda

YES, THIS KEEWEE IS VERY HAPPY WITH THE FRUITS OF MY LABOR OF LAST AUTUMN

STOP BY HERE AND SEE MORE OF MY BEAUTIFUL TULIPS.

Posted by Jennifer AKA keewee at 8:29 PM 4 comments: 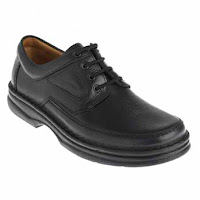 An eye witness account from New York City, on a cold day in December, some years ago:
A little boy, about 10-years-old, was standing before a shoe store on the roadway, barefooted, peering through the window, and shivering with cold.

A lady approached the young boy and said, "My, but you're in such deep thought staring in that window!"

"I was asking God to give me a pair of shoes,"was the boy's reply

The lady took him by the hand, went into the store, and asked the clerk to get half a dozen pairs of socks for the boy. She then asked if he could give her a basin of water and a towel. He quickly brought them to her.

She took the little fellow to the back part of the store and, removing her gloves, knelt down, washed his little feet, and dried them with the towel.

By this time, the clerk had returned with the socks. Placing a pair upon the boy's feet, she purchased him a pair of shoes.

She tied up the remaining pairs of socks and gave them to him.. She patted him on the head and said, "No doubt, you will be more comfortable now."

As she turned to go, the astonished kid caught her by the hand, and looking up into her face, with tears in his eyes, asked her "Are you God's wife?"

Yes, I have been tardy in posting, but life has been very busy lately. This past weekend, MrC and I were at a big Steel Challenge like match, just South of Portland, Oregon, called Man of Steel.
The weather was beautiful and I sure wish we could have brought some of the sunshine back to Whidbey Island with us.
Today it is overcast and looks gloomy, though it is not all that cold, so perhaps after I get home from work this afternoon, I can get outside to work on my vegetable garden. I will have a post up soon on the wonderful garden MrC is constructing for me.
Off to work I must go, check back in and I will endeavor to have news on the vege garden, perhaps as early as this evening.

UPDATE: You can see what has been accomplished in the garden HERE

Posted by Jennifer AKA keewee at 8:15 AM No comments: