How I spent Mother's day

I spent much of my Mother's day playing in my garden. The weather was warm so what better way to spend the day. 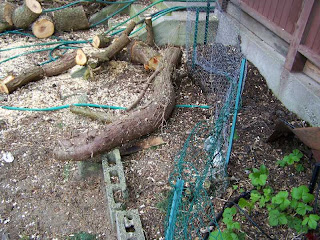 This is the area I tackled. We had some old Junipers and a Pine tree removed from along here. Right close to the bottom of the step is a stump which we cannot remove as the roots have grown beneath the steps and if we were to pull the stump out, the steps would probably be damaged, and we do not want to replace the steps at this time. Instead I have decided to plant around the stump. 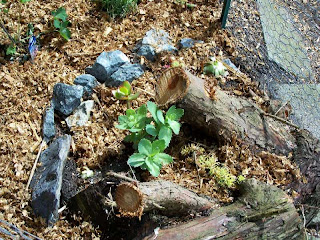 After dragging the two large logs out of the way, and dumping in a couple of wheelbarrow loads of amended topsoil, I planted some succulents a friend gave me and some I had in a pot in and around the stump. I am hoping, as the stump weathers and the succulents grow larger, this will become a somewhat attractive little garden. 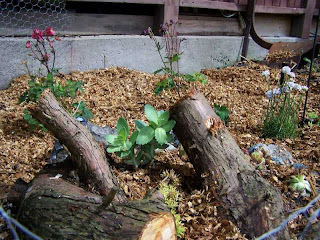 Behind the stump I placed two columbines, one a pretty pink and the other purple, and on the right a Thrift with showy white flowers. 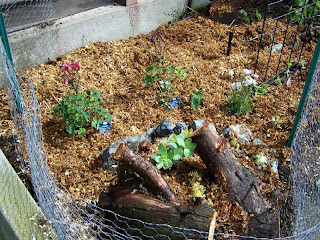 To the right of the Thrift, is a trellis with fragrant sweet peas planted in front. 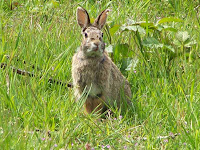 Have you ever had a feeling someone is watching you? this was the case as I was busily planting around the stump. I looked behind and there sat this cute little guy watching me. I bet he was trying to think of a way to go over, or get under the chicken wire I have around the garden, so he can feast on my new plants.
Planted on May 10th 2009 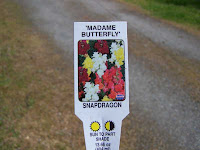 I have a fondness for Snapdragons which were found in both my Grandmother's and Mother's gardens. My brothers and I would pick the flowers from the stems and squeeze them so the 'mouths of the Dragons' would open up. I am sure any kids who have been around these flowers, have played with them in the same way. 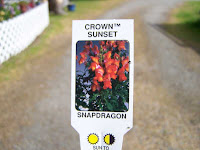 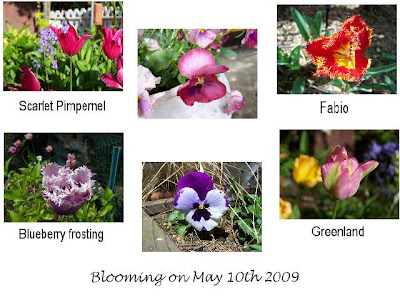 I could hardly believe my eyes when I went to put the new plants around the stump behind the carport. This where I had dug/ripped out the roses which were always a pain in the "you know where" when I attempted to weed this small strip garden. Those tough roses are continuing to thumb their noses at me, so to speak, and have put up new shoots where I thought I had dug/ ripped them all up from. Sighhh! 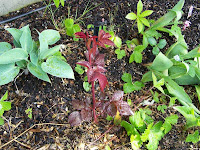 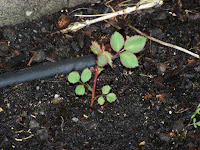 Perhaps in the future these will also be removed from this garden. The rose on the right is a particularly tough customer, as it has chosen to sprout under the eaves of the carport where is does not receive any rain, only water from my irrigation system in the summer months. We will see how long it lasts *grin*
Posted by Jennifer AKA keewee at 6:38 AM

Used to love playing with snapdragons.

I so enjoyed catching up this morning with you!
Your gardens will be pretty. Planting around the stump is a great idea.
I too love the snapdragons!
Cool and wet here. I must get some seeds sowed!
Sherry

You can come play in my weed patch anytime you want to! :)