And, no, that does not mean a weekend drinking Drambuie.

After visiting the Tararua Wind Farm on Saturday, Graeme, my brother, drove us to Mana where he has his boat moored. We were to spend the weekend there and to meet up with my younger brother, John, whom I had not seen for more than 20 years. John was working on the charter boat, Pamir, and was due back at the marina on Sunday evening. (more on John's story later) 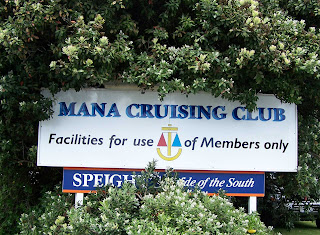 Mana Cruising Club is where Drambuie, Graeme's boat is moored. 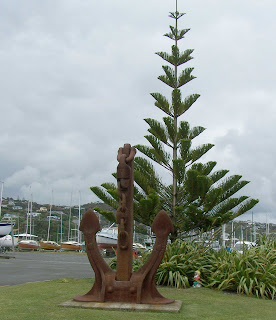 This huge anchor is right at the entrance to the club. 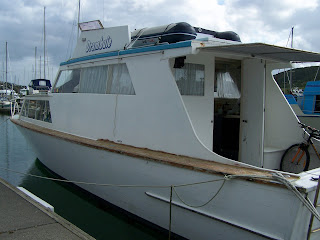 I emailed Graeme and asked him for more details about Drambuie, especially for George, who asked me about her.

Here is what Graeme says: She is a 36ft kauri carvel planked launch.. built in 1980 where or by whom I do not know as yet....she is powered by a 180hp turbo ford diesel giving a cruise speed of 9--10 knots max 14 knots. She sleeps five has all the usual domestics. fridge, freezer, toilet, shower, gas, water, heating, liquor cabinet, good galley, and she catches fish........

Drambuie is undergoing some changes, and sometime in the future she is going to be put in dry dock and totally gone over. There is painting to be done, a new door into the cabin to be installed and much more. You can see where some of the paint has already been stripped, in preparation for a new paint job. 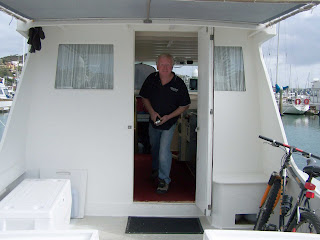 "Gee Sis, give that camera a rest!" 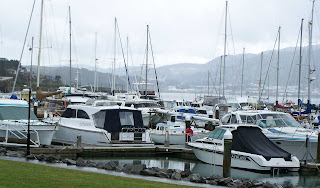 Part of the marina 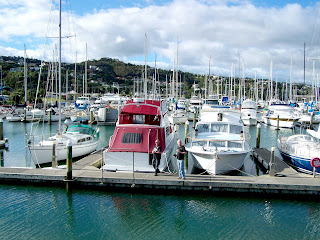 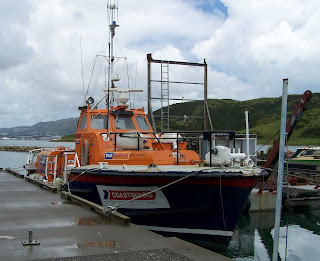 The coast guard ready to help in times of distress. 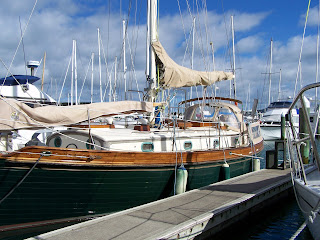 There are many, different kinds, shapes, sizes and age of boats in the marina. There are planked boats, fiberglass, concrete, aluminium and probably other materials I have not thought of. Quite a few folk live on their boats year round. 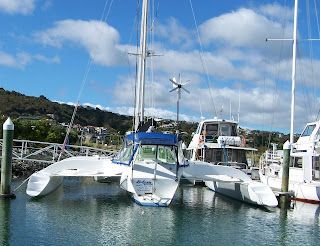 This catamaran is huge. 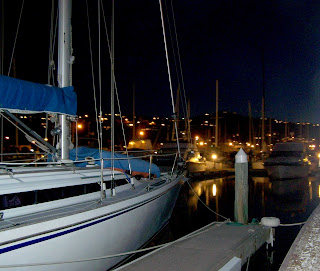 There is something magical about the evening around the marina. The air was calm, the marina and boat lights glowing softly, the voices and laughter of people drifting across the water, as they enjoyed time on their boats, and a feeling of peace and well being. I must say, I slept so deeply and woke in the morning feeling as though I had had a good night's rest. I think that it had something to do with the gentle rocking of Drambuie throughout the night. Of course it could also have been the few glasses of wine I had with my dinner.

Posted by Jennifer AKA keewee at 4:52 PM

Marvelous. Part of that relaxed feeling has to do with the fact that you rested aboard a WOOD boat, which are quieter, and less prone to too much movement at the mooring than are plastic boats of the same size.

Best of luck to your brother with his refit.

It's great to read that you were able to spend time with your brothers. Great photos!

Now I was thinking a weekend on Drambuie!! Sounds GOOD!! I like mine on the rocks!