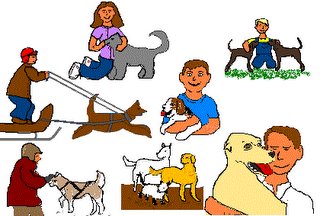 The reason a dog has so many friends is that he wags his tail instead of his tongue.
-Anonymous

Don't accept your dog's admiration as conclusive evidence that you are wonderful.
-Ann Landers

If there are no dogs in Heaven, then when I die I want to go where they went.
-Will Rogers

There is no psychiatrist in the world like a puppy licking your face.
-Ben Williams

A dog is the only thing on earth that loves you more than he loves himself.
-Josh Billings

The average dog is a nicer person than the average person.
-Andy Rooney

We give dogs time we can spare, space we can spare and love we can spare.
And in return, dogs give us their all. It's the best deal man has ever made.
-M. Acklam

Dogs love their friends and bite their enemies, quite unlike people, who are incapable of pure love and always have to mix love and hate.
- Sigmund Freud

I wonder if other dogs think poodles are members of a weird religious cult.
-Rita Rudner

A dog teaches a boy fidelity, perseverance, and to turn around three times before lying down.
-Robert Benchley

Anybody who doesn't know what soap tastes like never washed a dog.
-Franklin P. Jones

If I have any beliefs about immortality, it is that certain dogs I have known will go to heaven, and very, very few persons.
-James Thurber

If your dog is fat, you aren't getting enough exercise.
-Unknown

Ever consider what our dogs must think of us? I mean, here we come back from a grocery store with the most amazing haul -- chicken, pork, half a cow. They must think we're the greatest hunters on earth!
-Anne Tyler

If you pick up a starving dog and make him prosperous, he will not bite you;
that is the principal difference between a dog and a man.
-Mark Twain

You can say any foolish thing to a dog, and the dog will give you a look that says, 'Wow, you're right! I never would've thought of that!'
- Dave Barry

Dogs are not our whole life, but they make our lives whole.
-Roger Caras

If you think dogs can't count, try putting three dog biscuits in your pocket and then give him only two of them.
-Phil Pastoret

My goal in life is to be as good of a person my dog already thinks I am.
Posted by Jennifer AKA keewee at 9:18 AM

KeeWee you have gone and done it again.
Good Sunday Reading on a Thursday.
There are free calenders available on Yahoo....