Last pin shoot of the season

Yesterday was the last scheduled bowling pin match of the year at Central Whidbey Sportsman's Assn. in Coupeville, Washington. My shooting of late has not been as I would have wished, but I was feeling a little burned out after a long shooting season, and was ready for a break. I went to the match with an attitude of, this is the last match of the year, get it done, and go home.

We started with all shooters shooting four qualifying tables of five pins per table against the clock to determine first round matchups, I qualified pretty near last. 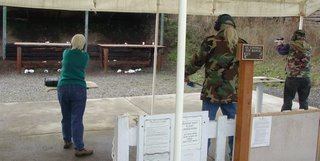 After qualifying we started the single elimination matches. The qualifying process ensured that your first round opponent will be of a skill level similar to your own skills. You must win two out of three tables against your opponent to advance to the next round, otherwise you are out!

First I came up against LouG and thought "I am toast, I will be relegated to spectator" and would have been if Lou hadn't had, a misfire or jam. As good fortune would have it, I advanced to the next stage, and waited with held breath to see who I would be up against next.

Mr.C and Rainy were up next and Rainy scored this round. Next Mr. C came up against Tony and this time was victorious. Dang, that meant he and I would be competitors, I really would be TOAST!


As I was getting ready to compete against Mr.C, I said to myself, "Oh well, here goes," and shot as fast as I could and prayed I could be accurate, and at least make a halfway decent show of it, and not be too embarrased.
OMG I could not believe this had happened, if you have ever seen how fast Mr. C shoots, then you would know why I was in shock, he hadn't had a missfire, gun jam or anything.

Someone should have had a camera to record the look on my face, I won this table too. Holy cow, how on earth did I manage that!!!!!? Now I am really in shock.

The first table, I narrowly lost and knew I had better concentrate harder if I stood a chance of getting the second table.

As you see in the picture of the second table we shot, Rainy has four pins still on the table, the fifth just going over the edge. I had shot two off and was going for the third and fourth which I managed to shoot off the table. By this time Rainy had caught up to me and we were both aiming at the last pin. S**T the light in my optical sight disappeared. Rainy beat me fair and square.

What a way to end the season. I fully expected to go home feeling just as dissapointed as I have for the last few matches, instead I came home feeling more confident and ready to put more effort into next year's matches, Gee I may even practice a little more. Mr. C mumbles at me, " I don't how you manage to shoot so well with the LITTLE bit of practice you do"
Natural talent EH, Giggle!!

Posted by Jennifer AKA keewee at 9:54 AM

Oh Wow.. way to go! That must have been so exciting.