Today is my day for doing some more painting on the hallway. I was ready for a tea break, had some paint left in the tray, so decided to use the paint on the only wall left, which did not have a bunch of stuff that had to be removed before painting. I chose the wall above staircase leading to the basement. Look at the difference in color, I do not usually care for white, but this dark area needed to be lightened and I really like the reflective quality of the white paint. 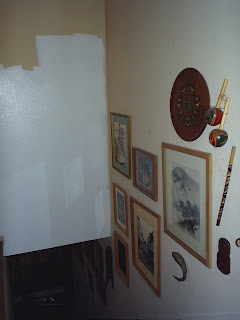 The paint tray was now empty, the roller wrapped in a plastic grocery bag until I had taken a break, so I made my way out into the kitchen to brew my tea.

As I entered the kitchen and looked out the window, I was surprised to see that it had started to snow. You can barely see the neighbors house.
Here I have been thinking we were done with snow and spring was on the way. Sheesh! 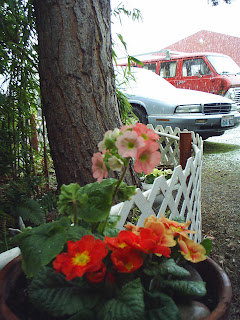 The snow flakes were dinner plate sized, Ok, they were quarter sized, and quite beautiful as they floated gently to the ground.
So much for wishing for spring, as I said,
Don't count your chickens ETC.
UPDATE 4pm 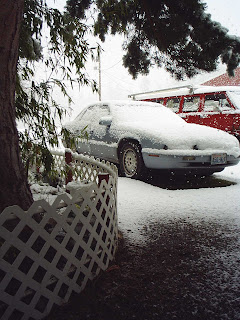 By 4pm we had about 2inches of snow. 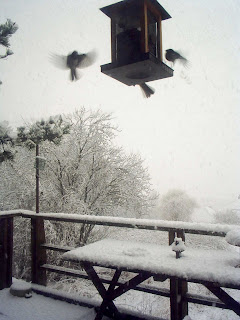 The bird feeders were empty, so I went out and refilled them.
The birds were sitting in the trees just waiting for me to go back indoors. I am sure as soon as I entered the house they were at the feeders.
Posted by Jennifer AKA keewee at 11:32 AM

We haven't seen any snow at all, in fact everything's budding and blooming over here - in the heart of Winter!
We can only hope the Carnival tradition won't back fire on us :-)

I hope we get more snow.

Wow Keewee, you have more snow over on Whidbey Island than we do over here in Montana. That's okay, you can keep it!!!

Love the birdies at the feeder photo.