Last week while at work, I heard the sound of an engine out side. At first, I did not really pay attention, as there is construction going on next door, but After a short while I realised the sound I was hearing was not a construction sound, so I went outside to investigate. 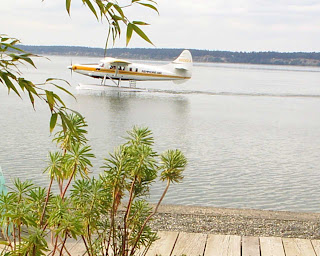 Here is what I saw. Back inside I ran, to grab my camera, wow, what was a float plane doing this close to the spa and Inn. The plane started to circle on the water and as I looked along the beach, there was another float plane off loading passengers onto the beach. I put two and two together and figured out the second plane was waiting to taxi to the beach to let it's passengers off after the first plane pulled out. 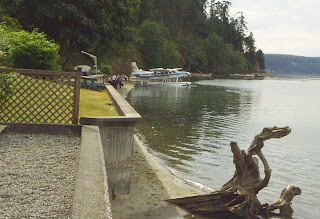 I walked along the boardwalk closer to the plane, to get a better picture and to also confirm my suspicions that the visitors were coming to stay at the Inn. One of the Inn's receptionists was standing here where I took the photo and another was down on the beach helping people off the plane. I asked the woman if the people were coming to stay at the Inn, and she told me they were staying for dinner. Imagine that, flying across from the mainland just to have dinner. 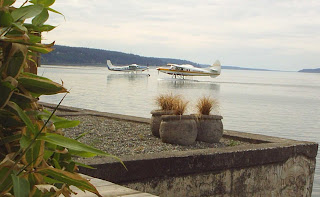 The first plane had landed all it's passengers, and the second was taxiing in to let it's passengers off onto the beach where they had to walk the short distance to gain the boardwalk, then on into the Inn. I hear the passengers were from one of the BIG companies in the Seattle area.

The second plane, a speck in the sky, heading back to where it started from.
There is always something interesting going on around where I work, so I am hardly ever without my camera to record such events.

Posted by Jennifer AKA keewee at 10:19 AM

I just love the scenery, and don't blame you for not moving anywhere without your camera Keewee!!!