Just in case you were wondering why I have not been posting new entries the last few days, here is the scoop.
On Saturday MrC and I attended a wedding in Renton, and reception in South Seattle. After the reception we drove about an hour and 15 minutes to Silverdale, where we spent the night in a motel. Next morning we drove to the Kitsap rifle and Revolver Club where MrC shot in his first ever Glock match.
( for those of you who do not know what a Glock is. It is a type of pistol, made in Austria) 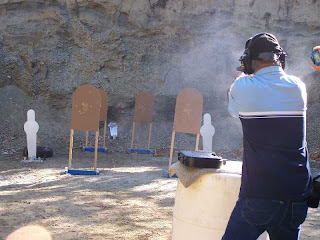 After MrC had done all the shooting he signed up for, we hit the road to catch the ferry from Port Townsend back to Whidbey Island.
As we approached the ferry dock I could see sails of various sizes and shapes of sailboats, then I saw a sign advertising a festival in Port Townsend, that is why there was so much activity in and around the town.
After we had boarded the ferry and started to move away from the dock, I grabbed my camera and hurried up the stairs to the upper deck hoping to get pictures of some of the sailboats. I was not disappointed. 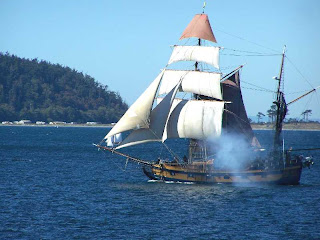 I was relieved that I had put the camera strap around my neck, as when the cannon on this fabulous sailboat boooomed out, I was so startled I almost dropped the camera over the rail. There would have been a few swear words uttered, quietly of course, if I had lost my camera over the side. 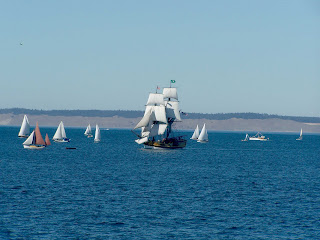 Large sailboats, small sailboats and some in between. 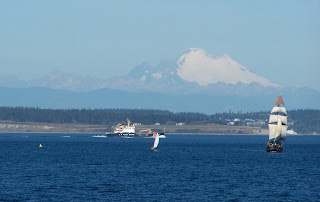 MrC has a more in depth account HERE
Posted by Jennifer AKA keewee at 8:49 AM

Your photos are fantastic!! I have wondered how many cameras are at the bottom of that bay as that has happened to me. Thank goodness for neck straps!