Thursday 8th November and the beginning of my second day in NZ. I was wide awake at 4am which was my usual 7am USA time, this just has to change, I told myself, otherwise I am going to be exhausted by the end of each day. ( It took another couple of days, for my body to figure out that I could actually sleep in until 7am)

My plans for the morning was to drive to my daughter, Tina's home, spend some time with her, then do some exploring in the afternoon.

I was just about to leave my cabin when there was a knock on the door. I opened the door to find a young Maori man standing on the bottom step, he proceeded to tell me that my bonnet was unlatched. Huh?? It took me a second to translate into USA language, Oh yes, the hood of my car was unlatched. I could see right away that there were Kiwi terms I had not heard in a while and I would have to do some quick translation. *chuckle*

I spent the morning with Tina, going grocery shopping with her and her chore provider, then returning back to Tina's house to fix some meals to put in the freezer, so the chore provider could have a break from cooking for a few days.

After lunch I drove to the VictoriaEsplanade Gardens, which is conveniently just behind the Holiday Park where I was staying. The development of the Esplanade began in 1897 with a gravel footpath laid on one end of the 361 acres of land granted to the borough of Palmerston north in 1876 for use as a public park. The gravel footpath was named "Victoria Esplanade Drive" to commemorate Queen Victoria's 60th Jubilee. 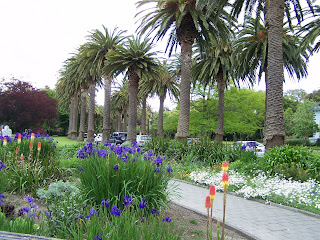 The Date Palms line both sides of one of the roads through the park
The Victoria Esplanade covers an area of 19 hectares (approx 361 acres) adjacent to the Manawatu River.

Some of the bird aviaries
There is a conservatory and lath house, plant displays, native bush with trails throughout, a fernery, bird aviaries, BBQ and picnic areas, a kid's paddling pool and playground.

My brother and I rode the miniature train. More on this adventure later.
A miniature railway winds throughout the esplanade. You take in the color and fragrance of the Dugald Mackenzie Rose Garden, and much more. So you can understand why I spent much of my free time wandering the garden areas, trails and checking out everything there was to see. It is a most relaxing beautiful place to spend one's time. 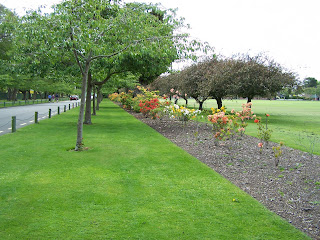 The cherry blossoms had finished blooming, but the Azaleas and Rhododendrons were still beautiful
Posted by Jennifer AKA keewee at 1:22 PM

Was it summer time there?

You know I would have loved to have been in that beautiful garden. Love your pictures!!

Helen, it was late spring, but felt like summer, as the temperatures were unseasonably warm.

Hostagirl, you would have been drooling over the wonderful plants just as I was. I will do a post later on showing some of the flowers and plants growing in the Esplanade.

With it being so cold and white here.. it is hard to believe that in another part of this earth there is such green vegetation and beautiful flowers. What a wondrous world it is.

That green grass looks so inviting, and that street looks so vacume cleaned!!

WOW That is sooo PRETTY!!!