NEXT YEAR I WILL COMPETE 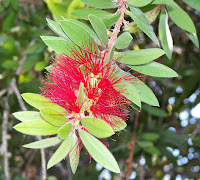 I was surprised to see the Pohutukawa trees which were growing along one side of the parking lot where we parked our rental vehicle at the Hilton, during our visit to Valencia CA.
Pohutukawa trees grow along coastal regions in New Zealand where I grew up, so the sight of these lovely trees with their striking blooms, made me think of my homeland. 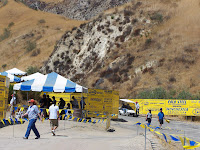 The range where the 2008 Steel Challenge was held, is out near Lake Piru. As you can see from the photo, the area is very dry, and the dust covered everything, including shooters and everyone else.
Temperatures were very warm, and if you were not used to living with this kind of heat, then it was rather uncomfortable. I was happy to leave the range at the end of each days events, and get back to our air conditioned hotel room, for a nice long shower.

MrC was in squad 4, and I must say, they are the nicest bunch of people. There were 8 stages to shoot starting with "outer limits' which is not the most favorite of some of the shooters. The other stages were, Pendulum, Roundabout, Showdown, 5 To Go, Speed Option, Smoke & Hope, and Accelerator. 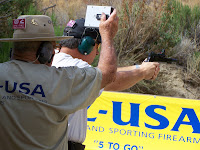 RO, (range officer) Gene, AKA "Gunny" timing Scott as he shoots "5 To Go"
Gunny runs a "tight ship" when it comes to how he wants the rules adhered to concerning this event he was running. He is a "no nonsense" kind of guy and by golly you had better listen and mind what he says. All this said, he has a great sense of humor, and under all that gruffness, there is marshmallow. 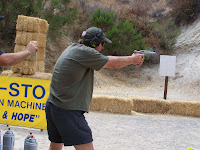 Matt knocking some paint off the steel plates.


Jeffrey, showin' smoke
as he shoots the "Smoke & Hope" stage.

Flora, the only woman in squad 4

Flora is taking her first step towards the second box, of the two, you have to shoot from in "outer limits". This stage takes some serious concentration as there are several things you have to be paying attention to, to have a successful run.

Don (below) and Dale (right) both starting out towards the second box in "outer limits" to finish the run. The setup is, 5 steel plates, one of which is a "stop plate"
so you shoot 2 plates from one box, move across to the other box, shoot two more steel plates ending with the stop plate. If you accidentally shoot the stop plate before the other four, then you are "toast" I have made this mistake before, and from then on paid a lot more attention to what I was doing. 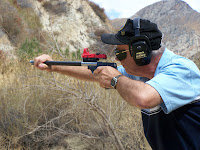 My Honey MrC doing his thing.
MrC's gun, a High Standard with a 12 inch Volquartsen barrel, and his unusual grip, brought quite a few comments. One of the most common comments I hear when people first see his gun is, "what the h--l is that?"
I am so proud of my honey, he placed 24th out of 55 shooters in his class, and they were the best in world he was up against.

As we left the range after another long hot day, we noticed a number of cattle under the trees, enjoying the shade, except for "old Bossie" Guess she does not mind the heat.

A quick photo of Magic mountain as we drove by.

I am not a fan of roller coasters. Never been on one and don't want to.
We had a wonderful time in California at the World Steel Challenge and look forward to next year.

This, in a comment on Keewee's Corner, from Flora "Already looking forward to next year and please promise me you'll shoot! We ladies will have a blast"

Yes Flora I will be there. I do have many hours of practice ahead before then.

Posted by Jennifer AKA keewee at 5:21 PM

It looks like fun :O) I used to shott pistol and rifle in my teens and early twenties ... Not so popular now I live in NZ ..

I AM SO GLAD YOU TWO HAD SUCH A GREAT TIME. MOST OF THE TIME GETTING HOME IS USUALLY THE BEST PART ISN'T IT! TAKE AN EXTRA NAP!