Friday evening we all went to dinner at Louis' Basque Corner. I am all for trying something new, but this time was a little disappointed, in that I thought it could have been a little more authentic. The bread they served was just an ordinary French loaf sliced and placed in a basket, whereas I was looking for more of an artisan crusty type of bread. I will say, my order of lamb was very good, tender and tasty. They also served French fries which I thought an odd choice, and dessert was just a dish of ice cream with chocolate sauce.
To quote MrC. "Not bad, not great, over priced, but interesting anyway" 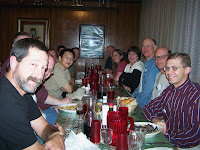 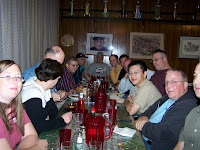 
Saturday was range day for those of the group who wanted to go shoot all kinds of guns. I elected to stay behind and spend my time wandering around the Italian street fair which was held adjacent to Circus Circus where we were staying. I was thankful I had packed my down coat, as there was a very brisk breeze. 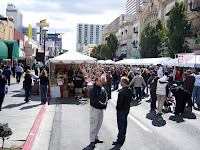 I took this photo from the steps leading to a stage where grape stomping competitions were held through out the day. As I made my way further along the street the crowds were elbow to elbow all looking at the various booths or lined up at one for some of the delicious food being offered. I did buy one cannoli which was filled with a creamy ricotta, chocolate chip, dried fruit mix, then rolled in powdered sugar. It was delicious. 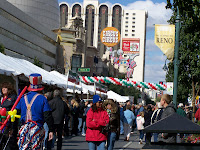 Many of the Italian families, had a booth where they were cooking their own special family spaghetti recipe. You could buy a bowl of plain pasta for $1, then go around all the booths and sample all the different spaghetti recipes. 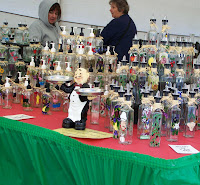 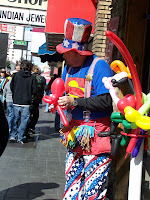 The children were enjoying being entertained by this fellow making balloon animals etc.

One of the booths selling calamari, garlic bread and a deep fried bread, a little like a doughnut. 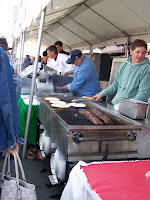 I wish I had been hungry enough to have one of the pizza like sandwiches these folks were offering. A flat bread which had been toasted on the grill, had some kind of sauce spread on it, then thinly slice grilled beef, and finally layers of tomatoes onions and greens. 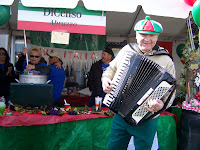 Not exactly my kind of music, but it was fun and added to the atmosphere. 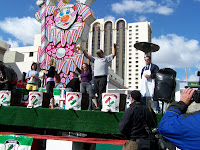 The winners of the grape stomping event raising their arms in victory.
This was a fun event to watch. There was one person doing the stomping and their partner was holding a jug under the spout to collect all the juice, while using their free hand to clear all the grape stems and skins from the screen in front of the spout.

Posted by Jennifer AKA keewee at 6:49 PM