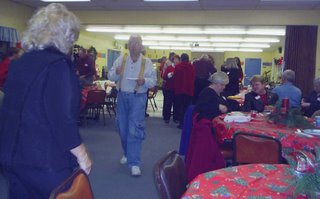 Club members and family are starting to arrive to enjoy a social get together before we attack the potluck food. David, walking towards me, has a plate of dip and chips. I had to chuckle when Mike went for the dip as I knew one of the ingredients was spinach, he does not care for spinach, so when I asked him if he liked it, he replied "it was Ok" I told him that there was spinach in the dip, and he told me "there was enough other flavors going on that he could not taste the greens, and he did not go back for seconds" *chuckle* 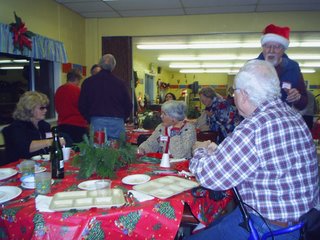 Is that Santa? nope, that is Don in disguise, wearing his Christmas hat. 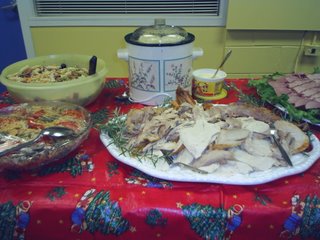 The tables are being loaded down with, Salads, turkey, mashed potatoes smothered in butter, ham. 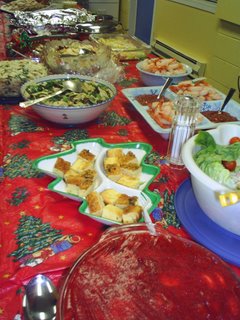 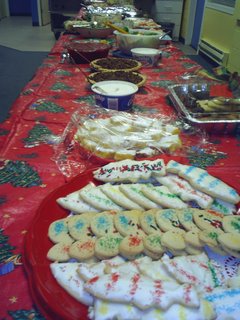 Oh! yeah, desserts are arriving, the tables are groaning under the weight of the scrumptious food. You better believe it, the Fishin' Club has the best cooks ever, and we don't waste a morsel, or perhaps that is, the morsels go to our waist. *smile* 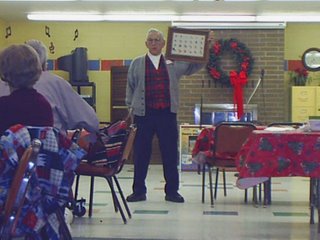 After filling our tummies, we got down to the fun business of an auction. Gil donated a fly plate, (beautifully tied fishing flys, mounted and framed) for the auction. Dennis was our auctioneer and a fine job he did indeed.
The bidding started out at $50 and hands went up all over the room. The bidding went up and up, not so many hands being raised now. The excitement grew, until there were just two people trying to outbid each other . Jack and kevin were the two in hot pursuit of the prize. 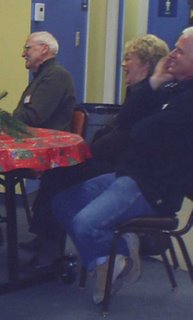 Kevin, (front) Jack, (rear) were certainly have a great time bidding on the fly plate.
The club members clap, cheer, laugh and encourage the bidders. 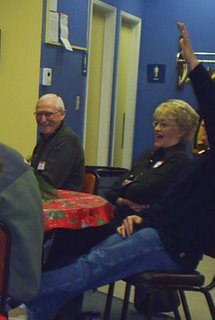 From autioneer, Dennis, "do I hear $200" Kevin's hand shoots up, the crowd cheers and claps. 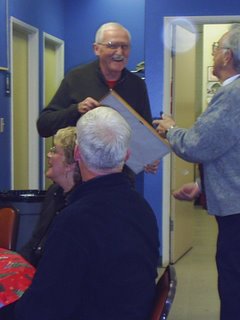 And the winner is----- Jack. Well, actually Jack was bidding for Gary, a club member who was unable to attend the party. Gary had set a limit to the bidding so I can only imagine the fun Jack had bidding for the prize. 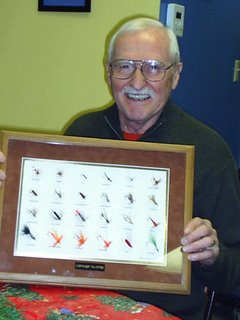 Jack holding Gary's prize. Well done Jack, we know Gary is going to be delighted to receive his trophy when he gets back home. And thank you to Gary, as the money for the bid will go towards our scholarship fund. 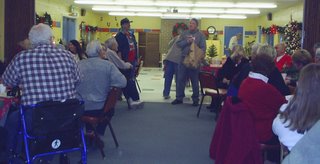 And the fun is not over yet. Every club meeting, we have a raffle, and all the losing tickes are held over for an end of year drawing for some pretty nice prizes. Richard has his hand inside the bag, The first ticket drawn, has no name, discard that one. Draw another ticket, I don't remember the order in which the tickets were drawn, but there were a couple drawn and the holders were not there at the party so we put the tickets aside so we can call these folks and tell them of their good fortune. 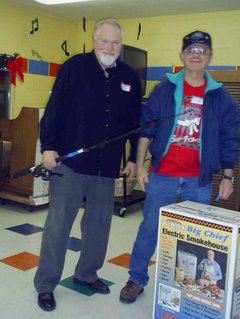 Mac, chose as his prize this very nice fishing rod, he also had a choice of a large or small electric smokehouse.

Another fantastic party enjoyed by all, see you all next year.

Posted by Jennifer AKA keewee at 9:35 AM

You did have a good time, and all that lovely food.

What a wonderful time it looks like everyone had!:) thanks for sharing the pics! The food sounds really good - especially the crab!!

Was a great success! Table settings and table cloths made it festive. Excellent job done by all of our members. What a turnout.