SOMEONE WATCHING OUT FOR US

We are back from our BIG adventure and there was a little more excitement than we anticipated. I will give you the short version, well as short as I can make it.

We left Whidbey Island for Coeur d' Alene on Thursday evening on the 6pm ferry.

Around Bellevue the needle on the temperature gauge in the RV, hit the red mark, and lucky for us, we were right near an off ramp and a nearby "park & drive" which we pulled into.

MrC put on his "mechanic" hat and took a look under the hood to see what kind of problem we had. After lying on the hard asphalt with antifreeze dripping on him (and a few cuss words later) he found that the radiator had a small split on the lower left corner. I can tell you for a fact, I am always so impressed at how my honey can fix almost anything.

After MrC used a piece of heavy duty bungee cord, a strip of metal plumber's tape and a sheet metal screw to patch the split, we limped our way along the freeway making the return journey back home. When we arrived home, I threw all of MrC's wet antifreeze covered clothes into the washing machine, fixed us some food to eat, for when we resumed our journey, and MrC went to work on pulling the radiator out of the RV and making repairs. I told you he is good at repair work, as we managed to get back on the road and catch the last ferry off the island at 12:30.

Of course, we were both very tired by now, but we had an Eddy Brown Memorial Metal Match to shoot in Coeur d' Alene on Saturday at the Fernan range, and we wanted to arrive on Friday, get set up in our camping spot, and put in a little practice before the event on Saturday. We drove until 3:30am and finally pulled into a rest area at Vantage, slept for about three hours before continuing our journey in the morning, into Moses Lake where we enjoyed a hearty breakfast.

We arrived at the range just outside Coeur d' Alene around 12:30 and found a shady spot for the RV out of the heat. Dang it was hot, and I was not looking forward to a day of shooting in that kind of heat on Saturday. 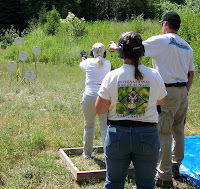 Shooting my favorite stage called Zig Zag
I spite of the heat, Saturday turned out to be an exciting, fun filled day for both of us. We both shot well in the Eddy Brown Memorial Metal Match with MrC winning 1st place in the .22LR Division, and I was hot on his heels with 2nd place. Whooohoo!! 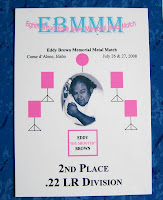 After all the awards were given out, we hit the road once again for Missoula MT, where we were to stay at a friend's place over night before the drive to Deer Creek range, for Sunday's Montana Shooting Sports Association's Celebrity Bowling Pin Shoot
We pulled into our friend Gary M's place around 11:30pm and collapsed into bed for a few hours sleep.
We arrived at Deer Creek range in time for the shooter's meeting, before the days event started, We forgot we were in a different time zone, and were nearly late but just before we left Gary's he did remind us about the difference in times between WA and MT

Sooooo, after the match in Missoula we went to Mackenzie River Pizza to have something to eat and enjoy the company of our friend Gary and his son Ty before starting on our journey back home.
On the return journey we once again, spent a few hours at a rest stop at Vantage, then next morning we enjoyed a tasty breakfast at Ellensburg. After breakfast, feeling tired but happy to be returning home, we pointed the nose of the RV towards Whidbey Island and zoomed our way along the freeway, until just as we came up on North Bend, there was an awful bang and loud crunching sound from under the hood and the temperature needle shot up onto the DANGER red mark. MrC and I glanced at each other with an OH S--T what now? look, and once again we were lucky to be right at an off ramp which we limped/coasted down into the parking lot of a gas/convenience store, where one more time, MrC put on his "mechanic hat" and looked under the hood. 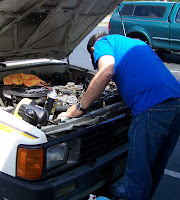 This time it appeared the bearing in the water pump had exploded, but we think "The big man upstairs" was looking out for us (perhaps he drives an old rig like ours) as there was a Schucks two blocks away where they had just one water pump on the shelf which fit our RV. AND both times we had mechanical troubles, there just happened to be an off ramp we could use and we were not on the top of a mountain pass or some such place.
My VERY TALENTED sweetheart, changed out the broken water pump, for the nice new shiny one, and had us back on the road in under two hours, and all this included walking to Schucks twice for parts. Ladies, never question why your guy seems to carry what we may think unnecessary junk in his toolbox, because believe me, they can fix almost anything when they have the right tools and "bits & pieces"

So there it is, our BIG ADVENTURE is over, and now I am going to have a nice long shower before enjoying at least 8 hours of uninterrupted sleep.

Posted by Jennifer AKA keewee at 5:39 PM

WOW!! THAT WAS A VERY EVENTFUL WEEKEND FOR YOU TWO! I AM SO GLAD EVERYTHING TURNED OUT SO WELL WITH YOU AT THE MATCH. BUT I THINK YOU FORGOT TO TAKE THIS VERY WARM WEATHER HOME WITH YOU!! GEEZ! IT'S GOING TO BE 90 DEGREES ALL WEEK AND OUR ELECTRICITY WILL BE OFF ALL DAY TOMORROW FOR MAINTANENCE...I MAY SPEND THE DAY AT THE LAKE!

Hey KeeWee,
It sure was "FUN" ! Glad you guys did so well, and it's NOT luck. You two are GREAT shooters and it shows. Had a really GOOD time myself even if I didn't place, but didn't really expect to this year.
Luv Ya Dear,
LouG

You guys sure have interesting adventures!

Wow, and my wife will never know why I carry a tool kit in the boot.
sounds just like me, apart from the shooting of course but then havn't done it for years.
I had a water pump go once like that it was the fact that they need anti-freeze in the water to lubricate the bearing in the pump, that won't happen again, go you 2,
bythe way going to Las Vagas in about a month and then touring the Grand Canyon.

Oh Lucky you!!! 34 years ago, i blew an engine on Lookout Pass at midnight in a blizzard with two kids and a bunch of luggage!! That was not fun.