This coming Thursday is the Fishin' Club's Smoked Salmon Derby, where club members smoke up salmon fillets using their own favorite recipes, and take them to the club meeting for judging by the members.
This is the first time I have ever tried my hand at seasoning, brining and smoking salmon. In previous years, I have watched MrC as he went about the process of dry brining salmon then patiently waiting for the salmon to finish being smoked in one of our smokers.
This year, we were not able to get out to catch our own salmon, but MrC knew of a commercial fisherman who sometimes sells directly off his boat. We were lucky this year to have two lovely fresh salmon to fillet and get into the smokers. 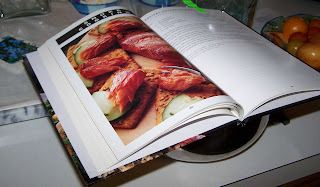 Even though I have watched the process, and remembered all the ingredients used in dry brining salmon, I decided to use a different method for my entry into the derby. I had found this recipe several years ago and have been wanting to use it, so now was my chance.
MrC used the dry brine method. see HERE
After mixing up a brine of OJ, grapefruit juice, water, brown sugar, canning salt, honey, lemon juice, lemon pepper, and a little garlic, I placed the two fillets, MrC had prepared for me in a plastic ziplock, poured in the brine mixture and placed the bagged salmon on ice, in the fridge to soak overnight. 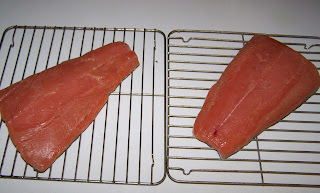 This morning after washing the brine off the two fillets, I used paper towels to pat dry the fillets and left them on the racks to air dry while I got the smoker ready. We use Alder chips to flavor the fish. In my opinion Hickory is a little too strong for my taste. After about an hour the salmon was ready to place on oiled racks in the smoker.
Every hour or so I would go outside and empty out the woodchip pan and refill it for another hours smoking. I did this about four times in all. 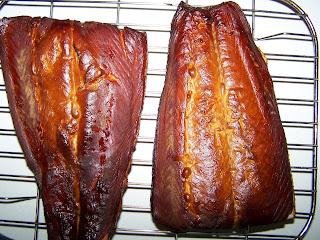 Early this evening I brought the salmon inside and decided it was not quite as firm as I wanted, so gave it another 20 minutes in the oven, and as you can see, it turned out perfect. It also tastes good, as I discovered, after eating a small piece of salmon I accidentally knocked off when removing the rack from the oven.
Now I am hoping to win the derby, but of course I have some stiff competition, not only from my honey, but several other club members who always bring some delicious entries for the derby.
In all truth, winning the derby is not as important, as creating your best recipe, and entering it in the derby , and having fun doing so.

Posted by Jennifer AKA keewee at 7:41 PM

'It also tastes good, as I discovered, after eating a small piece of salmon I accidentally knocked off when removing the rack from the oven.'

Yes I believe you accidentally knocked it off.

smoked salmon, the real stuff, not from a packet!
thanks for introducing it to me.