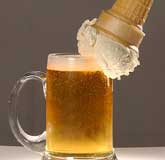 Justification for beer and Ice cream! But stay away from the pizza!

As we all know, it takes 1 calorie to heat 1 gram of water 1 degree centigrade. Translated into meaningful terms, this means that if you eat a very cold dessert (generally consisting of water in large part), the natural processes which raise the consumed dessert to body temperature during the digestive cycle literally sucks the calories out of the only available source, your body fat.

For example, a dessert served and eaten at near 0 degrees C (32.2 deg. F) will in a short time be raised to the normal body temperature of 37 degrees C (98.6 deg. F). For each gram of dessert eaten, that process takes approximately 37 calories as stated above. The average dessert portion is 6 oz, or 168 grams. Therefore, by operation of thermodynamic law, 6,216 calories (1 cal./gm/deg. x 37 deg. x 168 gms) are extracted from body fat as the dessert's temperature is normalized.

Allowing for the 1,200 latent calories in the dessert, the net calorie loss is approximately 5,000 calories.

Obviously, the more cold dessert you eat, the better off you are and the faster you will lose weight, if that is your goal.

This process works equally well when drinking very cold beer in frosted glasses. Each ounce of beer contains 16 latent calories, but extracts 1,036 calories (6,216 cal. per 6 oz. portion) in the temperature normalizing process. Thus the net calorie loss per ounce of beer is 1,020 calories. It doesn't take a rocket scientist to calculate that 12,240 calories (12 oz. x 1,020 cal./oz.) are extracted from the body in the process of drinking a can of beer.

Frozen desserts, e.g., ice cream, are even more beneficial, since it takes 83 cal./gm to melt them (i.e., raise them to 0 deg. C) and an additional 37 cal./gm to further raise them to body temperature. The results here are really remarkable, and it beats running hands down.

Unfortunately, for those who eat pizza as an excuse to drink beer, pizza (loaded with latent calories and served above body temperature) induces an opposite effect. But, thankfully, as the astute reader should have already reasoned, the obvious solution is to drink a lot of beer with pizza and follow up immediately with large bowls of ice cream.

We could all be thin if we were to adhere religiously to a pizza, beer, and ice cream diet.

Posted by Jennifer AKA keewee at 7:52 AM

Something is missing from your calculations. I am living proof of the null-hypothesis. For some reason the more ice cream and ice cold beer I drink the more weight I gain and I don't even eat pizza. What went wrong?

Has no one a sense of humor? I'm an engineer and understand the miscalculation, but it's more fun to follow along the path of ignorance!

I like Keewee's explanation better. Decades ago I was very thin on a diet of beer and pizza, so somehow, supporting her hypothesis. Maybe it has to be cold pizza...