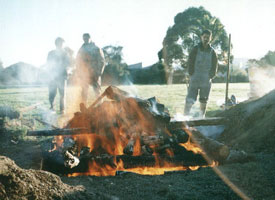 The pit has been dug, the stones placed, and a fire lit on top to heat the stones 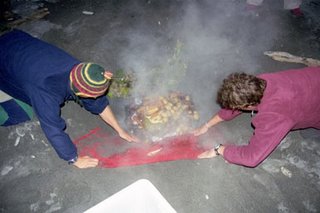 The fabric covering being removed to expose the Kai (food). The traditional method the Maoris used, was to cover the food using leaves.


Kai is the Maori word for food. Maori, New Zealand's indigenous people, were hunters, gatherers and crop farmers, who gathered food from the forest, stream, sea and garden. Their diet was traditionally birds and fish together with gathered wild herbs and roots. Gardens grew root crops including potato and kumara.

New Zealanders today continue to enjoy traditional Maori cuisine and delicacies. On special occasions feasting includes traditional foods and cooking methods. Food is often cooked in a hole dug in the ground, in a traditional style known as a hangi.
Food is placed on hot stones which are overlaid with cloth and covered with a mound of earth to allow the heat to cook through. This whole process takes several hours.

In the thermal areas around Rotorua region however, Maori use geothermal steam and hot pools instead of traditional 'in the ground' cook methods.

There is nothing quite like sitting around with a bunch of your friends, enjoying the delicious food cooked in a hangi, washed down with a beer.

Posted by Jennifer AKA keewee at 8:31 AM

Recently watched a show on NZ that was led by the Prime Minister, I believe. It was on the Discovery Channel. Lots of helicopter shots also. Beautiful place

What fun! Food, friends and beer. Why don't we (read "I") do things like that anymore?