Smaller than a Dinosaur, larger than a kiwi 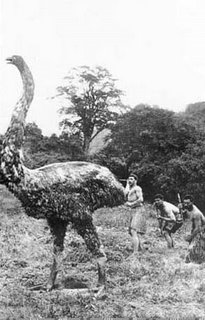 Top Ten Things
that everyone should know about Moa

2. Some were BIG.
As big as Big Bird from Sesame Street. But the smallest were turkey-sized.

3. They were eaten to extinction.
By indigenous Maori, along with much else.

5. They were ratites.
Other ratites include ostrich, emu, cassowary, rhea, and kiwi.

6. Most lived in forest, not grassland.
They weren't feathered cows. And there was no grassland to speak of.

7. They probably didn’t stand around with their heads in the air.
Unlike some museum mounts. It makes them look impressive, though.

8. You can still find their bones.
Mostly in caves, swamps and sand dunes.

10. Moa (sing. and pl.) is pronounced more like MORE than MOWER.

Posted by Jennifer AKA keewee at 7:51 AM

Wooo, looks pretty big in that photo. Must be one of the females in the larger species.