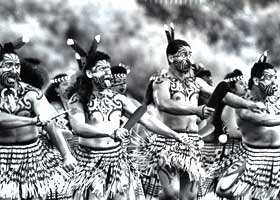 Dance or haka in Aotearoa/New Zealand is a cornerstone of Maori culture and increasingly national New Zealand identity. Haka literally translates as "fiery breath" and a fierce attitude accompanies the performance of traditional haka. Maori culture is deeply rooted in a tribal system in which the protection of land and other resources is paramount.

Historically, groups were on constant alert for potential invaders. The elaborate protocol system that marks the encounter between tribes, between tangata whenua, or people of the land and manuhiri or visitors, illustrates the importance of maintaining correct relations in a situation of potential threat. This approach also characterized relations between Maori and pakeha or Europeans who migrated to the islands in the early 19th century.

In pre-European time the haka was performed as part of the formal process when two parties came together. Even when the purpose of the meeting was peaceful, people had to remain on guard in case of an unexpected attack.

The hands, feet, legs, body, voice, tongue and eyes all combine to play their part in conveying the fullness of the words in the accompanying chant. The strong movements, facial contortions and the glaring pukana eyes of a performer served to distract or intimidate an audience and especially a potential enemy. The use of the tongue for intimidation and distraction is restricted to men and in the past women mainly utilized hand gestures and the pukana to support a group of male warriors in their performance.

Today there is no tribal warfare but national performance competitions and festivals allow groups to reenact historical relationships. 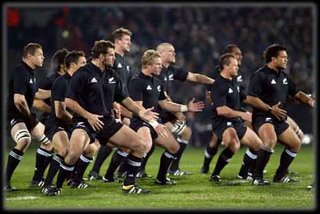 The most famous modern use is its regular performance by New Zealand's national rugby team, the All Blacks, who perform a haka before international matches not only as a reflection of the importance of the game that is about to be played but also to motivate themselves and their supporters to greater efforts.

To see a video clip of the haka go HERE Click on Maori, under *teaching resourses* then click on haka. I like to watch the clip in Maori as it gives you a greater feel for the dance.

Posted by Jennifer AKA keewee at 7:05 AM