Lamington cakes are delicious 2" cubes of sponge cake with a chocolate and coconut coating. They originated around 1898 in what later became the state of Queensland Australia. They were named after Lord Lamington, a popular governor of that colony. The chocolate icing keeps the cake moist. It protects it from drying out in the hot climate. Lamingtons are the most popular fund-raising item for school groups, scouts and girl guides. 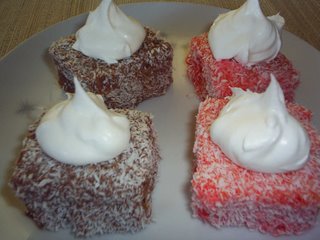 Sometimes I also use jello which is just on the verge of beginning to thicken, to coat the lamingtons. For this batch I used cherry jello, and I like to serve them with a big dollop of whipped cream.

Bake the cake 24 hours before icing it. A slightly stale cake is easier to cut and frost, and the icing moistens it up again. The coconut is available from health or Asian food stores. 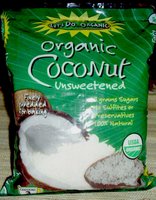 I found this coconut at a local grocery store in the health food section.

Day 1: Preheat oven as directed. Grease 9" x 13" pan as directed. Prepare cake mix, bake and cool as directed. Turn out on a rack, and when cold, wrap in foil and let stand in refrigerator 24 hours.

Day 2: Sift powdered sugar and cocoa into a bowl. Blend in butter and add boiling water. Mix well until smooth. Stand bowl in pan of boiling water and stir until runny. Leave bowl in hot water while dipping cake squares. Place coconut on sheet of wax paper or in large baking dish. Cut cake into 2" squares. Hold piece on fork or barbecue skewer and dip into warm icing, drain and toss in coconut to cover evenly. 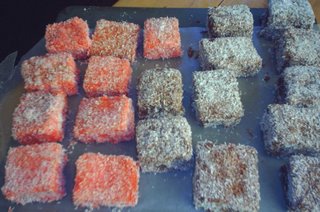 Place on a wax paper covered cookie sheet to dry.

Posted by Jennifer AKA keewee at 8:43 PM

Leading us into temptation
again?!?
I must pay you back for this,
LOL!

I'll be waiting gincoleaves. I love to see new recipes.