One of the side events at the World Steel Challenge, was the Cowboy Fast draw. I have to admit this was the most fun event to watch and participate in. 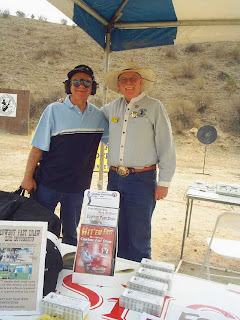 When MrC found out that the cowboy fast draw was going to be a side event he spoke about it with our friend, Damiphino, who shoots fast draw, with the result being, a left hand holster arriving in the mail, and plenty of instruction via telephone, so he could get in a little practice before going to Valencia, California where the event was being held. 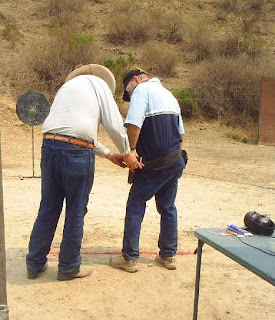 Quick Cal adjusting the holster in just the right position. 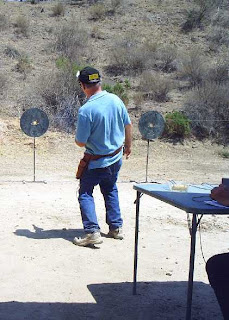 You would think you could not miss a target which is two feet across and just fifteen in front of us. You can miss them alright as we both found out. 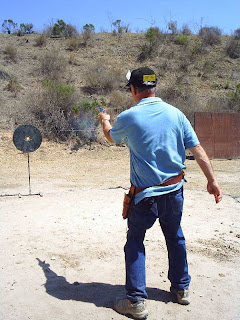 Put some cowboy boots, shirt and stetson on MrC and he would look the part. 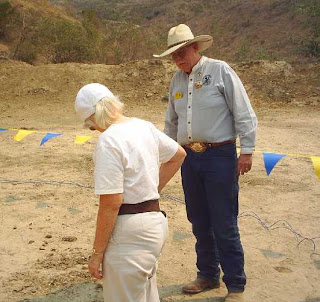 Yes, I was talked into trying out fast draw by MrC. First they had to find a holster small enough, then I had to figure out how to shoot a revolver, never having done so before.
Quick Cal watching as I struggled trying to pull the hammer back one handed. My hands are so small, and did not have the strength to do it, so we went to drawing the gun from the holster with my right hand and pulling the hammer back with my left, and shooting two handed instead of one handed. 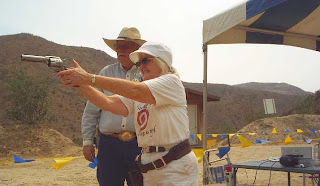 So now I know how to cock the hammer, all I needed to do, was get some coordination going, so everything would be smooth. Yeah sure!! easier said than done, but after a few shots I did hit the target and of course I let a whoo hoo! I am sure with a lot of practice I could probably be a cowgirl fast draw shooter. 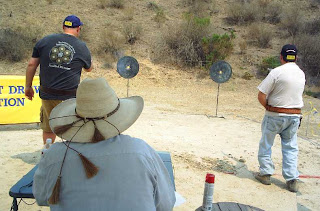 These friends decided to have a "shootout" they sure had us laughing at their antics.

Well that is all from our adventure in California, and next year I plan on competing, though plenty of practice will have to be put in before then.
If you are interested in learning more about cowboy fast draw, click HERE

Posted by Jennifer AKA keewee at 3:58 PM

Nice post Keewee, my better half Prickly Pear says that with practice and a well tuned pistol even people with small hands can get the pistol cocked and hit the target faster than a lot of the guys. She has small hands too and I know I sure have to work to keep up with her. Also, like we keep being reminded a slow hit beats a fast miss every time.

Those targets can sure be hard to hit when shooting from the hip. We were shooting today and I'll swear that someone snuck in some stealth targets. I was having a heck of a time connecting at 21 feet.

Quick Cal lives up to his alias, I've seen him shoot repeatedly at .351 seconds. That's just over a third of a second to draw, cock, fire and hit the target.

We'll have to get a right hand holster out to you. Then you can give Mr. C a run for it.

Always talk nice to a lady who does fast draw.

Keewee, I've never even come close to holding a gun in my hand before, but I'm sure with a little more practice you'll master the fast draw as well, but Girl, I love your "Don't anybody move" pose!!!
:-)