After a very early 4am start to the day, Wednesday 15Th, our flight to Burbank California, then a half hour drive to the hotel, we were both exhausted and ready for a long nap. The nap had to wait as MrC needed to get out to the range and get in some practice before shooting on Thursday morning. 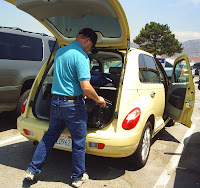 Our rental car, a cute PT Cruiser with just 1400 miles on the clock had plenty of room for all the luggage we had brought with us. The car sure was dusty after our four days out at the range. I must say, I am sooooo happy we do not live in Valencia, the heat and dust almost did me in.
STAGE ONE
Pendulum

The eight stages and the side events were spread out over quite a distance so we drove the car to a few of the side events as it was too darned hot to walk. The side events were set up so anyone could enter for a chance to win a gun either by shooting the best time or by having a raffle ticket for every time they entered drawn at the award ceremony on Sunday.

Erik, one of the squad members knocking the paint off of the targets.

After each squad member has finished his/her round, the targets are given a fresh coat of paint.
On a couple of occasions it was unclear if the shooter had hit the target, so the range was made safe and the range officer went out to double check the target in question. Sometimes the target is struck on the very edge and cannot be seen from a distance. 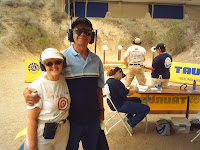 Mike P putting time on the clock, and that does not mean he wants a lot of time on the clock when the round is over. The idea is to shoot and hit every target in the shortest time possible.

Paul doing his very best to shoot a good time. 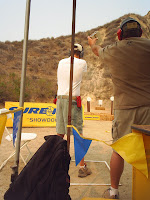 Chase 19 years old, the youngest in our squad.
STAGE FOUR
Five to go

The range officer going over all the rules before the match begins.

This stage is similar to one I have shot here on Whidbey Island, and I was thinking to myself about this time, perhaps I should have been shooting this year. Perhaps next year I will be ready, which means plenty of practice, groannnn!! I am not one to do a lot of practice, which makes MrC roll his eyes and say, " I don't know how you shoot so well with so little practice"
Click on the pictures for a larger view
MrC has his first part posted, so if you want to read a more in depth story about our adventure, then click HERE

For Steel Challenge results look HERE
Posted by Jennifer AKA keewee at 5:50 PM

Great pictures Keewee! Especially the one of you and MrC. I am looking forward to more pics of your trip.

I do like that photo of the two of you, and I will be watching and waiting for more!!!