Hawk, has his left foot off the ground ready to do a quick step into the box on the right, to shoot the last three, of the five targets.

MrC was concerned on this stage as down on the practice range, when he had to move from one box to the other, he was inclined to skid on the loose dirt and empty brass which were in the shooter's box. But here he did OK and did not skid at all.
STAGE EIGHT
Accelerator

Doug showing how it is done.

MrC putting rounds down range as fast and accurately as he can.

This was the end of the rim fire event, time for lunch before moving on to other events. I sure was ready for a break from the hot sun, so we walked down the hill to where they had a booth set up selling hot dogs a huge sandwich and ice cold drinks. 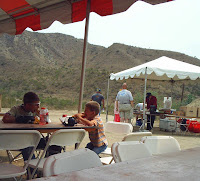 This little guy had both hands wrapped around a huge sandwich, and I was surprised to see him eat more than two thirds of it. The thought "hollow legs" came to mind.
After we finished our lunch we went to the Cowboy fast draw stage to try our luck at winning a gun. I will have more on this in part three.

Posted by Jennifer AKA keewee at 7:50 PM

Your first picture in this blog sure made me homesick for Africa - it certainly looks a lot like Safariland, all hot and dry!! LOL!
But the important part is, everyone had a jolly good time!!

Looks like you guys had a blast! Pun intended. ;)