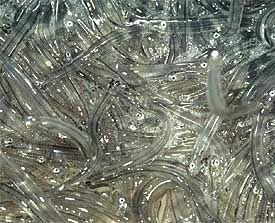 I was lucky enough to grow up living within a half hours drive from the beach, in fact when our new house was being built in the city we lived in our beach house until it was completed.

My Dad and his friends, spent many hours at the river mouths with their whitebait nets waiting to bring home enough whitebait to make fritters.

New Zealand whitebait are the juvenile of certain galaxiids which mature and live as adults in rivers with native forest surrounds. The larvae of these galaxiids is swept down to the ocean where they hatch and the sprats then move back up their home rivers as whitebait.

Whitebaiting in New Zealand is a seasonal activity with a fixed and limited period enforced during the period that the whitebait normally migrate up-river. The strict control over net sizes and rules against blocking the river to channel the fish into the net permit sufficient quantity of whitebait to reach the adult habitat and maintain stock levels. The whitebait themselves are very sensitive to objects in the river and are adept at dodging the nets.

New Zealand whitebait are caught in the lower reaches of the rivers using small open-mouthed hand-held nets although in some parts of the country where the whitebait is more plentiful, larger (but not very large) set nets may be used adjacent to river banks. Dad's net, if you looked at it from the side, was almost triangular in shape.
Whitebaiters constantly attend the nets in order to lift them as soon as a shoal enters the net. Otherwise the whitebait quickly swim back out of the net. Typically, the small nets have a long pole attached so that the whitebaiter can stand on the river bank and scoop the net forward and out of the water when whitebait are seen to enter it. The larger nets may be set into a platform extending into the river from the bank and various forms of apparatus used to lift the net.

The New Zealand whitebait is small, sweet and tender with a delicate taste that is easily over-powered if mixed with stronger ingredients when cooked. The most popular way of cooking whitebait in New Zealand is the whitebait fritter, which is essentially an omelette containing whitebait. Purists use only the egg white in order to minimise interfering with the taste of the bait. The whitebait are cooked whole, not with the heads cut off, as my Mother would have liked. She did not like those eyes looking at her, and never did eat the fritters. 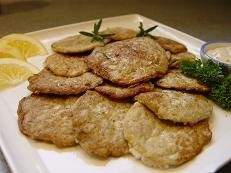 Directions:
Defrost whitebait naturally. Once defrosted place in bowl and add two eggs (without the shell). Using a fork, whip whitebait & egg mixture vigorously for approx. 15 seconds or until slightly frothy.
Add butter to pan, ensuring pan is nice & hot, and add small amounts of mixture to pan.
Cook for 45 seconds to 1 minute each side, or a little longer if you like them browned.
Posted by Jennifer AKA keewee at 8:26 AM

Fascinating, but I think I agree with your mother. I don't like my food looking back at me.

white bait hasnt been something that i grew up on..rather expensive i think and not having a fishing minded mother or father, we sort of missed out on that, I enjoyed your story i hope that kids are still experiencing that.
But tonight is my first time at cooking them, so was sort of going to do them like corn fritters i guess...but i sort of feel guilty now reading your story, so maybe half the way you said..just the egg mixture, and other half with a beer mixture..and then maybe go look for my own whitebait somewhere out there in a river..i feel inspired to share that with my step-son and nephews..thanks

As a Ex-Pat NZ'er, I read these things with 'tugs at the heartstrings'
I remember the 'hard core' whitebaiters used to just dust the whitebait in flour seasoned with pepper and drop them on a hot pan.
Nothing to take away the flavour.

We eat whitebait regularly in crete, greece, but not as a fritter. We wash the fish, pat it dry, pick up three or four at a time, flour them and drop them into a pan of hot (olive) oil. They need very little time to cook, and we only add salt! Coincidentally, I used to live in Wellington, and had never seen whitebait before I came to Greece!

whitebait can be found in the States in Asian supermarkets and is called Silver Fish, sometimes you can buy it fresh but most often it is sold in half pound or one pound blocks.

think the whitebait you would get in the states would be chinese bait they bring them into new zealand too.

just travelled for 3 weeks in NZ from Australia,and held out til the last minute to go to the fishmonger before going to the airport and bought back a kilo of whitebait ($105)just about to cook some now mmmmm!!

I lived in NZ in the '60's/'70's and sometimes frequented the West Coast of the South Island (whitebait country). At that time it was relatively inexpensive. I was told in years gone by it was dug into the garden as fertilizer. Sad that times have changed so.

Hi Keewee. Thank you for this recipe! We currently have a packet of whitebait from the supermarket and my wife asked me to search online for ways to cook it. I'll ask her to try out yours.

My other half is a New Zealander wholives in Oz. His folks still live in NZ and we have just met up with them in Queensland. They went whitebaiting before they left NZ and caught kilos n kilos of it. They bought a few kilos over for us and all the kiwis just loveds it. We still have just under a kilo in our freezer! I had full intentions of trying it until i saw it.....Totally agree with your mum Keewee...just can't handle their beady little eyes looking at me........ :-)

Aaaahhhhh...a person after my own heart. I agree with everything in your article and it was well told. Sounds like the Greek whitebait might be a little bigger than NZ whitebait...I couldnt imagine frying 3-4 at a time (of NZ bait)...they are much too small. My dad used to do two ways, the egg recipe you have or the dusting in flour and into the butter. What a delight....except when a whitebaiting day only produced about 5 actual whitebait. Wit ten children, (yes, ten!) that didnt go far, only as far as dads tummy. LOL

Just want to add...I was always told to DEFROST whitebait, (if you have to), it should be defrosted in milk. It helps retain and enhance the flavour apparently. I am trying it out today after finding some frozen south island whitebait. Will see if it is in fact true or not.