This morning I was at my computer, I thought, early enough to get my post done before I left for work. Funny how some plans are just not meant to be. Blogger seemed to be slower than usual, and that is prettty slow in the mornings. The picture of the Hibiscus would not load so I finally gave up and went out to get our breakfast.

I made it to the spa on time and did not break any sound barriers getting there. 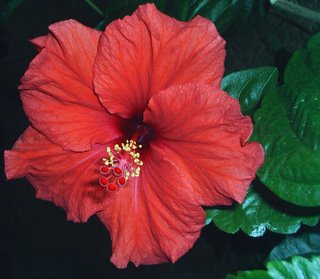 Now it is Monday evening almost all the creative ideas I had for my AM post have faded as has the daylight.

I do remember I was going to show you this picture of our Hibiscus plant, which I moved indoors a few days ago before a frost could damage it. Since moving it inside, it seems to be blooming more than ever and the blooms appear to be a more intense shade of red.

Do any of you make observations like I do? You notice something but it does not fully register at the time, until the same thing happens again, then you say to yourself ( well I do) gee! how about that, I have seen/heard that before.

It rained quite heavily yesterday and everthing was still very damp this morning.
As I arrived at work and stepped out of my car I was instantly aware of the sounds of many, many different bird songs. It sounded like every single bird in Langley was singing at the same time.
I now remember hearing the same chorus a couple of times before, after it had rained, and it makes me wonder if the birds were singing because they enjoy having their world washed clean by the rain, or is there another reason why they sing after a rain shower.

Posted by Jennifer AKA keewee at 7:28 PM

Keewee, this blog entry is as beautiful as the Hibiscus flower, thanks for sharing it with us all, :-)

My goodness.. what a truly beautiful Hibiscus flower. How wonderful that it is continuing to bloom.
I always am enchanted by a chorus of bird songs. I will have to take notice after the next rain fall. Of course.. here it may actually be snow falling. :-).

Coll where do you live? I love the snow but we rarely see it here in the west midlands (England).