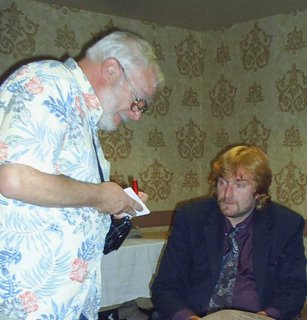 Rivrdog and Dan
I was honored to meet Dan McKown, guest and speaker at the dinner Saturday, who has a sense of humor which never quits, even in a situation that would make most people think of anything but humor. 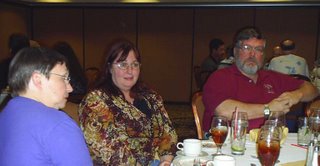 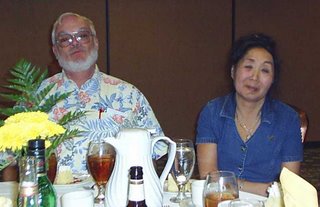 Rivrdog and his wife Blanche 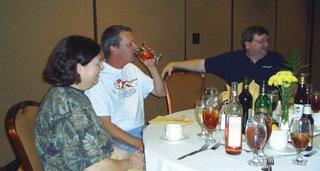 Fodder from Ride Fast & Shoot Straight and his wife the Commandress,
Kevin from The Smallest Minority 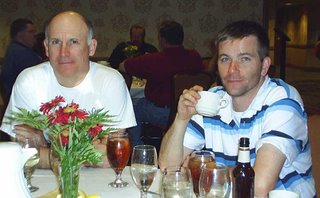 Joe Huffman (left) from The View from North Central Idaho, and Boomershoot.
SayUncle on the right. 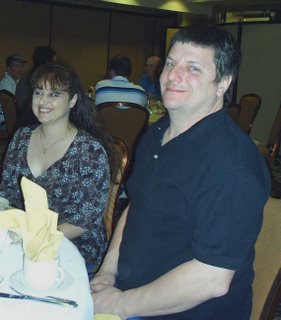 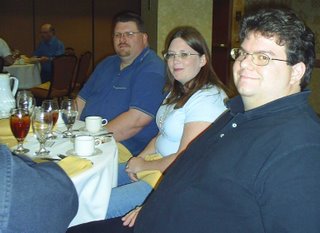 Chris Byrne( in rear) Anarchangel, his wife Melody, and their friend John 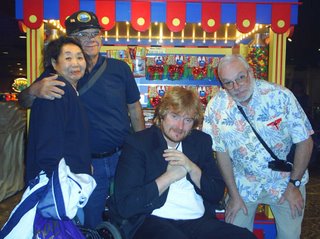 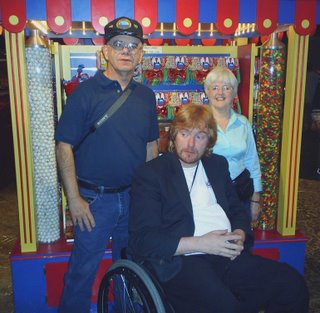 Mr. Completely, and his better half Keewee
Dan McKown

The dinner on Saturday evening was a great success. We had door prizes, and everyone went home with something. There were three major prizes. Third prize of a $50 gift certificate from Natchez Shooters Supplies, won by og of Neanderpundit, Second prize of a very nice leather range bag from Brownells, won by SayUncle, good thing he kept the bag close as I would have snitched it from him, and the First prize of a High Point pistol from Highpoint, won by Rivrdog, who graciously gave it to Dan McKown. Dan's gun was still being held by the police until the investigation was complete.

Dan told us the story about the shooting in the Tacoma mall which happened just about a year ago. He related how he was shot and all events surrounding the whole episode. What really impressed me was his ability to use humor in the telling of the story, and apparently when he was very seriously wounded he still managed to find some humor in the situation.

Now that I have met Dan in person I am definitely a huge fan, he has so many wonderful qualities, one of which is his love of children. At breakfast at the Victorian buffet on Sunday morning, Dan would talk to any child who walked past him, he would get smiles and giggles from all the kids.

Saturday evening, the dinner was consumed, stories were exchanged, there was much laughter and of course plenty of BS going on, but most special of all was the making of new friendships. Folks, we only knew as a Blog name, are now real to us.

I am looking forward to making more new friends next year.

See you all at the next Gun Blogger Rendezvous in 2007

Posted by Jennifer AKA keewee at 9:36 PM

That looks like alot of fun!!
Are you back yet?

Hi Phyllis, yes we are back.

Keewee, that sure looks like you guys had a lot of fun, entertainment and yummy food!!
It would have been hard for me to go back home, LOL!

Thanks for posting all these great pictures.